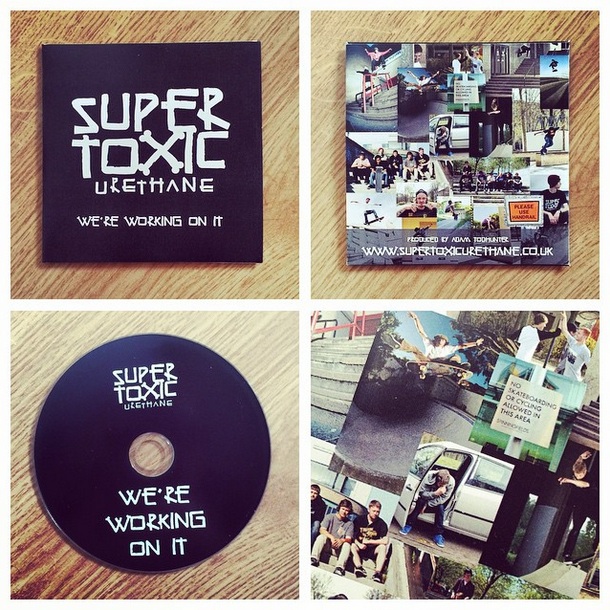 Those with a keen eye on the British skate game would know that Supertoxic Urethane‘s noxious status actually falls on opposites, as this crew are far from poisonous and are made up of mostly helpful scene cruisers who push forwards on many levels. Their first full length video, ‘We’re Working On It‘, filmed and edited by Adam Todhunter, may have taken time to procure as the title suggests, but this skater owned and run wheel company based in England with a heavy hitting team have managed to pack 30 minutes of exciting footage into an unforgettable film that is quintessentially British all day long.

Following an explosive intro sequence featuring plenty of teasing, Lloyd McLeggon enters the frame. Lloyd brings his comprehensive catalogue of ledge variations and effortless flip tricks, making Manchester’s harsh streets look like LA’s smooth sidewalks. A new page turns, the beat quickens and Mark ‘Radman’ Radden blasts a nice ol’ gap front board to kick off this part. The new Death Am has a lot to say for himself as he pushes fast and flips the board faster, fully committing to every trick, proven by some of the harsh terrain he’s hurling himself down throughout this section. 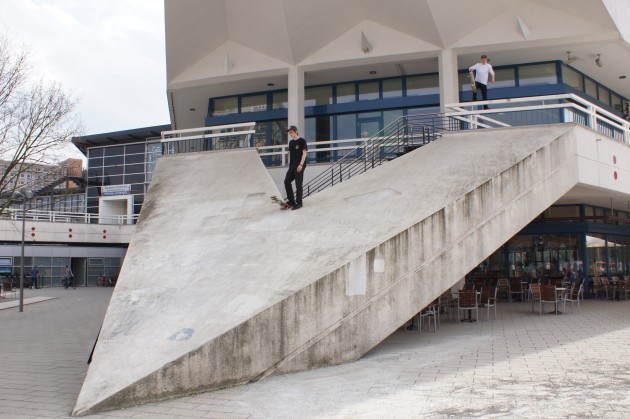 Next up is a section featuring Supertoxic’s flow riders. First up to the mark is Danny Abel. At only 19 years old he is definitely an upcoming talent to keep your eyes peeled for if this part is anything to be an indicator of. A highlight trick was a heelflip sex change, a trick you don’t commonly see in a video part, never mind down a lengthy double set in Berlin. Absolutely bonkers. Nonetheless his section is filled to the brim with quirky tricks, always taking the alternative route at any spot. This leads smoothly into a couple of tricks from Jamie Duncanson, some cool and collective manual expertise from the likes of Liam ‘Danish’ Palmer and a fine handful of clips from Robian Fifieild with a clean cut front board down a rail as the music drops to a deaf tone before disappearing.

From the silence, “Out of Egypt” by Part Company emerges. The song really encompassing the mood as Blackpool’s own Robert Sanderson dances his way onto the screen. This quick footed ninja incognito really knows his way around any manual pad or ledge, packing many flared tricks back to back in quick succession. Midway through Robert’s part, none other than British legend Alex Moul makes a cameo appearance tearing his way down a footpath and popping off of every crack. Robert returns strong with a stretched Benihana clean over a dustbin, showing off his prodigious pop; carrying on uninterrupted, he seems to push himself harder for the remainder of the part, cruising fast and finger-flipping his way out of a Berlin fountain.

Cardiff’s Steve King then kicks of his part with a five piece line, including a front board 270 out and a nose manual nollie flip, hinting at what’s coming. Steve demonstrates his versatile nature as he shreds every obstacle that stands before him. His exceptional board control is present as he frontside lipslides into a fakie manny and continues to fakie flip out! In addition to this the Welsh beast shows no signs of ever slowing down whilst doing fakie full cabs over an entire bench. Not to give too much away but this is just a small insight into how solid Steve’s part truly is. Legendary skater.

Cambridge powerhouse Charlie Munro then explodes into the penultimate section nollie-ing his way down a stair set that would make most people’s knees tingle at the thought. He also looks totally weightless as he hoists himself down handrails. Although this is no surprise to us as we’ve seen similar godly acts in the copious amounts of footage Munro has featured in – 2015 will surely be his year.

As tension has been running high Cumbria’s not so little secret Ross Zajac comes into view over the crest of a concrete wave, prepared to shut down the show as his footage spans over a two song ultimatum. Ross was always a strong contender for this final position as his neodymium feet catch the board with precision, every time. He performs savagely smooth lines, showing to us he definitely worked on it. Slashing blunt slides across jersey barriers Ross slaps down some worthy manoeuvres on the North West’s most rugged spots whilst defying the laws of physics with how fast his board whirls around. He finishes his part by bruising ledges and flipping over streets before the curtains draw to a close with a sleek marble wallride, watch it for yourself.

‘We’re Working On It’ most definitely deserves a spot in your skate DVD collection. It certainly will never be collecting dust with how often you’ll be bashing it on your TV in the morning before you rush the streets and join the hype. Support independent companies like Supertoxic Urethane and keep your skate scene yours.

Pick this up for £6 here where you will also find a stash of their fine Supertoxic Urethane Wheels, or ask for it in your local skate shop.