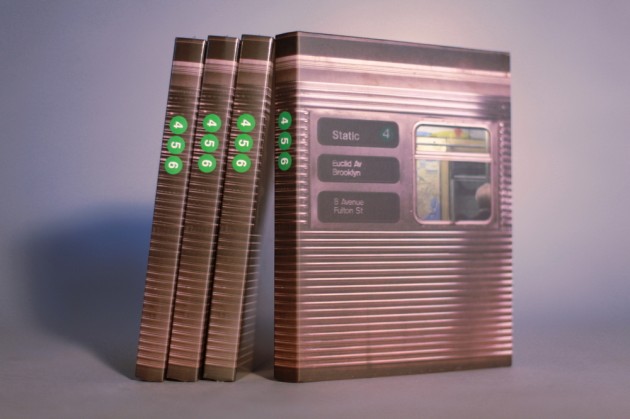 Alas the fourth and final chapter of Josh Stewart’s Static video series is upon us. I say “and” final chapter because even if everyone refers to this release as Static 4, there is in fact a disc 5 in the box. Josh has put a lot of time into these closing chapters – 5 years apparently – which is highly recommendable when you realize just how much free and accessible internet footage he has to put up with nowadays. In fact, the current trend of releasing everything directly to the internet didn’t miss a chance to nibble at Josh’s hard work as a few of the parts from this project appeared on a certain magazine website before the release, which is a shame when you see the quality of the end product.

Corners were not cut with this DVD from the cover art to the booklet containing photos and words linked to the project, and the soundtrack containing a selection of classic rap tracks (KRS One, El Michels Affair/Wu tang, RA The Rugged Man, instrumentals and accapellas to name a few) that would most definitely make a publishing lawyer’s ears twitch. Static IV is the final testament to skateboarding that rides, grinds and slides through the city streets across the globe every day.

Looking over the three previous chapters of the Static Series, I might say that Static IV stays true to form in that it focuses a lot on skateboarders that are close to Josh and that inspire him. An example of this could be Jahmal Williams‘ introduction featuring a group of B-Boys expressing themselves proudly with popping and body-locking manoeuvers. Jahmal Williams was a keen break dancer himself before taking up skating. There is definitely evidence of evolution in Static IV – and that’s not to state the obvious with the sprouting of Quim Cardona‘s dreads. Josh’s rather erratic thrusting of the fisheye in and out of tricks has evolved into a much smoother panning effect that compliments the flow of the skateboarding a lot better. There is the main theme of taking a journey underground that’s played throughout both videos. The underground is represented in both a literal sense with footage of subway trains and tunnels, and then there is the metaphorical underground embodied by the cast of skateboarders that sit just beneath the mainstream media’s radar. Yonnie Cruz, Brian Clarke and Brendan Carroll are three names that are sure to become references of what tomorrow’s street skating session should resemble.

I would also attach the adjective “independent” to the prevailing themes of Static IV. Josh Stewart is probably skateboarding’s most famous independent cinematographer who finances all of his projects. He also runs Theories of Atlantis that distributes a handful of independent brands from the US and Europe. These brands are very present in the video with riders for Polar, Palace, Magenta, Iron Claw, Bronze, Hopps and Isle getting busy for the camera.

The Static series has always been an antidote to the Californian sunshine, with plenty of New York and East Coast spots, trips to Europe’s busiest cities and even a few visits to the Bay Area of San Francisco. With the exception of a few of Vincent Alvarez’ clips, it’s a pretty strong position to take for an anticipated American video release to not feature Los Angeles or Southern California at all. Yes, Vincent Alvarez has a part in Static IV and the reason behind that would probably be because there’s a raw flow to his skating that matches a lot of the attitude his East Coast peers are famous for. The skateboarders Josh chooses to feature in his video are much more likely to produce long lines that blur burliness with cruising, rather than the athletic stuntman skateboarding of career-minded professionals that the major brands and media sources seek to project. Parts are kept short and too the point which helps the video flow a lot better than something that’s broken down by slow motion shots, multiple camera angles and epic lifestyle clips.

It might seem rose-tinted to believe that an actual hard copy DVD deserves a spot on your shelf, but Static IV is something rare. Much like that original VHS of Zoo York’s Mixtape or those vinyl records you love to scratch. There are only so many copies of Static IV in the world, and once they have been sold that’s it. You missed the train.