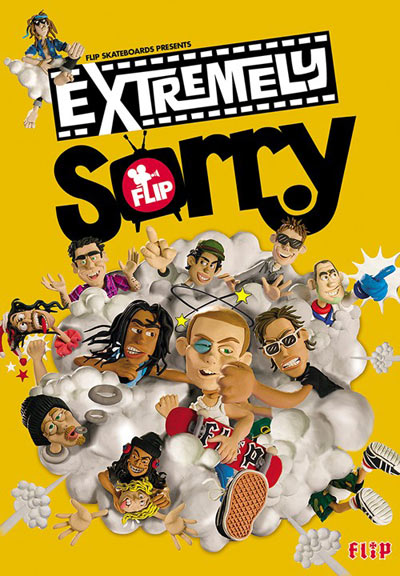 Flip find themselves in an interesting position going into 2010. Having gone through the biggest transformations of their existence since their last video offering Really Sorry, they had much to prove.

The unfortunate passing of Shane Cross, the near- death of Ali Boulala, the departures of RS ender Bastien Salabanzi and stalwart Arto Saari, the acquisition of the remnants of the Firm, and the addition of so many unknown youngsters meant that some wags were dubbing this video ‘Montessori’….Well, no surprises that the video kicks all kinds of arse then.

Shane Cross opens this classic with a sterling part. This is a perfect tribute to the Australian who is sorely missed worldwide. Ali Boulala maybe shut down for a little while longer but his section will remind you that despite his goofy nature he can still conquer the strangest of spots with his unique style. Rodrigo Teixeira avoids the curse of the underachieving Brazilian by putting in a ridiculous ‘leader of the new school’ section which is faultless in style and execution whilst head honcho Geoff Rowley shows a wonderful mix of skill and undiluted courage accompanied by Jimmy Boyes drop-in-of-death on the side of a building. Geoff’s section is full of hammers and shows he is still the man who is leading the fight at Flip, just ask anyone how windy it was on the day he decided to skate those freight containers for proof.

Mark Appleyard returns with more stinging perfection than ever before and proves that progression is still his top priority. Tom Penny shows once again that news of his demise is greatly exaggerated with perhaps his heaviest part ever, Rune Glifberg‘s concrete assault is so beyond that it loses any frame of reference (really, no-one can touch him on concrete today), and Luan Oliveira capably fills the spot vacated by PJ Ladd in the head-scratching stakes. The force is strong on this one for sure hence turning pro from this film already.

Lance Mountain‘s section will leave your mind blown with pool skating at its very best by arguably THE best and most respected in the business. Click here for words with the big man on this very site. Bob Burnquist‘s heroics alone are worth hailing the release as some kind of milestone for the culture. He shuts down the megaramp with a bunch of switch treats and jumps into a canyon leaving the door firmly shut for now on the big stuff.

Discovery of the video for me though is Louie Lopez, who shows world- dominating ATV potential in his varied and exciting part. His blonde haired buddy Curren Caples adds to the am-excitement and will be battling it out with the rest of California’s micro- Am prospects in the future, these guys are serious all round contenders as you would know if you saw them live this year at the Flip London demo back in 08.

New British acquisition Ben Nordberg had a short section and of course, being British we were hoping for more. But knowing he joined the team so near to the final cut of this blockbuster it’s hardly surprising there were only a handful of tricks on display. His time will come though as he’s got so much potential on every level that it will be worth the wait for the next flick and every web edit in between. German tank Willow has a fantastic section fueled by a mean hardflip and is one of the best European riders out there and David Gonzalez‘s monstrous double- ender has at least one cheek puffer every 5 seconds for about 6 minutes. Excellent stuff from the Colombian machine who destroys everything in its wake to finish the job.

This is the last film of the ‘Sorry’ trilogy and even comes jam packed with a bespoke soundtrack courtesy of producer Baron who worked over 5 years with artists such as Snoop Dog, Dave Lombardo of Slayer, Motorhead’s Lemmy, Black Mountain’s Stephen McBean, ex Pennywise frontman Jim Lindberg to get the end result. This adds to the completely unique situation this production brings to the table so make sure you have one on your collection as you will be watching this for years to come.