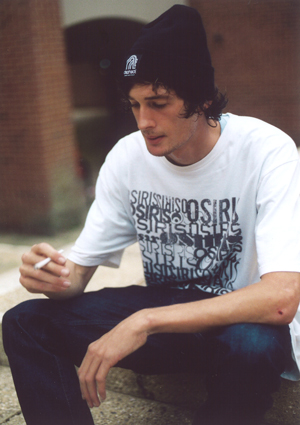 Despite his nickname (that I won’t mention as he hates it) Dave is actually a pretty decent chap. Dave first started sending me some footage a few years ago and it was clear from the start that he had a certain talent on the wooden plank. He’s also raised eyebrows a few times on the Ride With Us tours and he never shies away from a game of skate as he rarely loses.

And I’m still not 100% sure whether he is goofy or regular.

So you’re currently living just outside Brighton, have you been there all your life?

Yeah man, been here since day one!

And how long have you been skating for now?

What’s good and bad about growing up skating in the grand old town of Burgess Hill?

Damn son! Well one of the main pros has gotta be the ledge, it’s perfect, always buttered real good. There are a lot of good ledge spots and local schools, good for get techy and sorting some tasty lines out. But the amount of decaying old people that roam Burgess is unbelievable, the town centre is the epicentre for most of them.

It must be good living so close to Brighton too, right?

The beach is always pretty good after a west pier flatground session, just gotta keep those eyes peeled for the used jonnies and shitty knickers on the beach but other than that it’s good. Summer times in Brighton with the amount of buff nuffs is always pretty healthy. 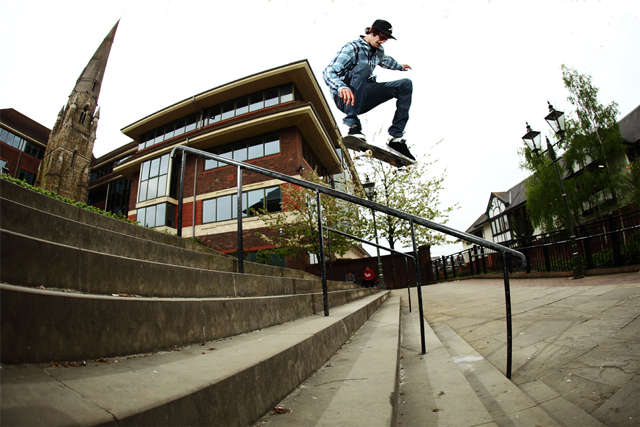 So you’re getting product from Osiris, Dephect, Nueu and Another… how long have you been getting stuff and are you on the way to getting a deck sponsor now?

Yeah they are sorting me out great. I think the first was Nueu about 3 years ago and the most recent being Osiris! Psyched on it! Also check out Kickzoo! Death help me out now and then for boards.

How are you doing for boards? Is the real reason you skate ledges instead of stairs and gaps because you’re trying to make that wood last?

Well normally I am on a ledge hype but when involving stairs you’re bound to get some board casualties. I always try and make my board last as long as possible… I have ridden boards that are long past their sell-by date!

Tell us what stuff you are filming for right now…

I just finished a Dephect edit [which you can see at the bottom of this interview – Ed.], I’m also working on a Tweaker Zine article that will have an edit to accompany it. P.12. Also something with Mint magazine. There is always something going on.

Are you planning on going to uni?

Recently I have been thinking about hitting uni. I am looking into at the moment hopefully moving towards the big smoke next year! Just gotta find the right course.

Is there anything you’d like to get more involved in filming wise if you move away from Brighton?

Yeah man for sure I would love to work on something like a whole street section that would be dope. Hit the streets of London… East India and Shoreditch, lines for days! I wanna try and hook up with Morph soon as well. 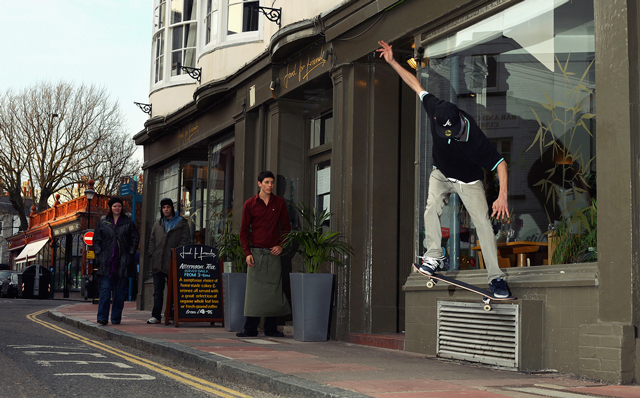 You like to travel I’ve noticed… where in the world have been skateboarding?

I love travelling. I have been to Paris, Barcelona, Prague, India and a load of places around the UK. India is a crazy place to skate man, all about the moped runs… hitting the speed bumps and dodging cows was mad.

Tell us about the time you went to Barcelona and completely ran out of cash… how did you survive?!

Well I was in Barcelona for 6 weeks and the last 2 weeks I had no money which was kinda hard. Beforehand I stocked up on this cereal called nougat which was chocolate parcels with milk; that was a pretty healthy diet for the last 2 weeks. I was just super hyped to be in Barca and tried not to think about the money situations. But on my return journey to the airport I forgot about the €5 bus charge so had to sell my shoes to get back to the airport. But it all worked out! Some guy got some tasty kicks and I got home!

Are there any other stories of you managing to blag it abroad or even at home on a low budget?

Right, where do I start? On one occasion I got a plane ticket bought for me to Barca and left with £20 in my pocket. Ended up getting housed and fed with help from Keith Allan who I met at MACBA and did not know him before that trip. It ended up being a super good trip! On the first Ride With Us tour I managed to scrape together a tenner for the trip and it lasted the whole week! I think I came back with £7 in my pocket. It was pretty good, thanks to all those Shell garages across the country! 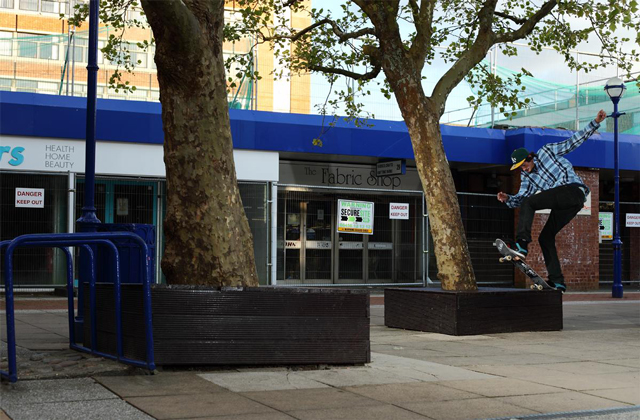 You are known for cleaning up at games of SKATE, when did this hobby start becoming a way of getting some income?

Not really sure, it all started with the éS Game of Skate UK final in 2008 and then a bunch of other games all over. I think it’s a good game, you gotta be on point! One fatal primo and you’re done!

Gotta go with the nollie flip. Either that or a nollie heel body varial.

In your recent trip to Skegness all your tricks were either switch or nollie… was this a coincidence or do you just like the challenge? 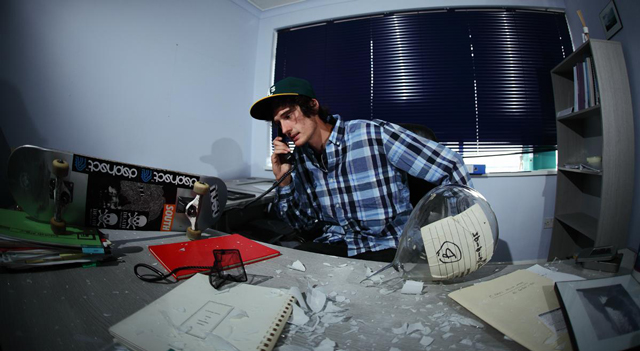 I understand you’re a big fan of chess, do you have a go-to attack plan?

There are a few tactics I use, I try and change it up every time so it makes it a challenge and tests the brain. Sometimes I hit them with the pawn wave or just straight up bishop attack!

As we’re approaching Winter, let’s hear about the wet days… How do you spend your time chilling other than a little bit of chess?

Oh god, well a combination of things, the collaboration of Facebook and Youtube normally hit me pretty hard at the start of the day! If it’s wet then this continues! A few games of chess, brews and gaffas and you got the perfect combination right there! I always try and keep on top of college work but this involves more brews and gafs. There is a bar in Burgess thats nicknamed Jurassic park because of all the grim veloceraptors in there! It’s alright there, once I saw someone giving birth on the dance floor! That was different!

What if you’re too desperate to skate, where would you go to avoid the rain and still shred?

Wet days are not so bad… means I can catch up on a bit of college work. But when it overwhelms you and you gotta skate then we have a couple of warehouses in Burge which are handy. Got a few ledges in there, banks and stuff too… one of them is real crazy! It used to be a cat vaccination centre where they mix up all the chemicals, pots of acid and test tubes lying around you don’t wanna be slipping out in there! It ended up getting called acid house!

But recently we found a real golden nugget out in the middle of nowhere me and my mate found a derelict chicken coop it’s pretty much twice the size of Bay66 and undercover! I am really hyped on this and the construction of ledges has begun! Should be a dope spot!

This is crazy! This phrase once started of as “peace out son” and it got more and more warped. I don’t know the actual translation but looks like there is some nollie flip action going on at the end there!

Always get on a blackberry hype!