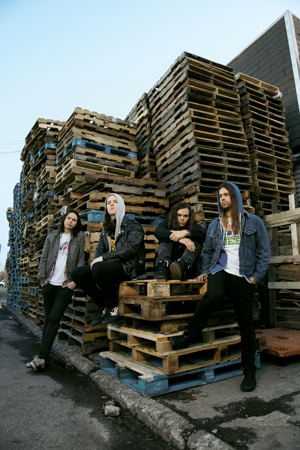 Australia’s Violent Soho have experienced several things over the past couple of years that many a fledgling rock band can only dream of. They were signed by Sonic Youth’s Thurston Moore to his own record label Ecstatic Peace!, they played a private show for Rick Rubin at his house and they got to record an album with the legendary production powerforce that is Gil Norton. Add to that the tours and festivals that they’ve been playing across the world and you’ve got a pretty exciting and turbulent lifestyle which the band could never have predicted, growing up in the bible belt area of Mansfield. We decided to give vocalist/guitarist Luke Boerdam the Crossfire treatment and find out what it’s been like for the band and what makes them tick. Oh, and some of them skate too. Bonus!

Do you know how Thurston Moore got his hands on your music? Was it a totally random thing?

Thurston Moore is like some weird omnipresent music guru. When we first met him I asked him if he knew a band from Brisbane Australia called Budd. Not many people in Brisbane know who that band is and he just turns to me and says “Yeah I know them. I put a double 10″ of theirs out in the 90s. I have a bunch of them under my bed.” So who knows how that guy finds music. We are just grateful he found us.

How did it feel working with Gil Norton? What are your favourite records that he’s been involved with in the past and why? How did he influence your music in the studio?

At first, I was scared shitless. I think we all were. But Gil is such a great guy and he made us feel so comfortable in the studio. But I mean you can’t help but be nervous when you’re playing in front of a dude who recorded the Pixies’ Doo little, Trompe le monde, Bossanova, The Foo Fighters’ The Color and the Shape… I mean, the list goes on.

How did Gil and Thurston react to your music? What do you think it is that drew them to working with you?

I remember we got a phone call and it was Gil Norton saying that he loved our music and said he would love to do our record. After it was all done and mixed he said he was real proud of the record, which meant the world to us. The first time I ever saw Thurston was at a venue in New York. He walked in while we were playing, stood right in front of James and started headbanging.

How much is the record (especially songs like ‘Jesus Stole My Girlfriend’) a reaction to the way you were brought up?

Very much. All the songs revolve, in some way, around the idea of loneliness, the mundane and boredom of suburbia. Mansfield is a bible belt area, we grew up with a lot of pentecostal christian influence. Jesus Stole My Girlfriend isn’t just a story about what happened to me. It also embodies a reaction against going with the normal.

What does your hometown mean to you and how does it feel being away from home for long periods of time whilst on tour / recording etc?

Our hometown is what made us the people we are and gave us the frustration we needed to make the music we do. So our hometown is everything to us. Being away from home for long periods sucks, but it also helps you keep going because in the back of your mind it reminds us why we do this. For the love of the 4122. 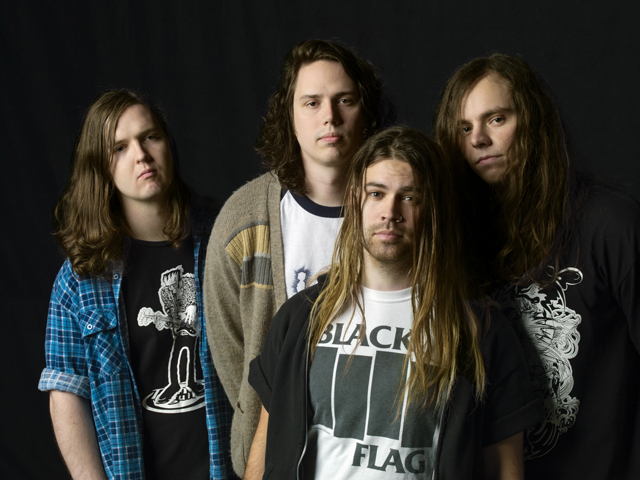 What’s your favourite thing about being on the road?

Meeting random people is always fun but my favorite thing is all the crazy junk food and weird bars.

Where is the most amazing place you’ve visited so far?

We camped out at Joshua Tree and went up to the mountains and looked out over the ranges but I think Santa Rosa in LA is the most amazing place. Anywhere where you get given over a half of the best bud ever is pretty amazing.

When you go on tour, do you take your board with you? What cool places have you come across to skate?

Yeah Shut Skateboards in NYC gave James a board so he always takes that with him. Hollywood is a pretty rad place to skate. Heaps of good spots.

James always goes on about Jay Adams and every story I get told makes me love the dude.

Does skateboarding influence your music in any way?

Sure, I mean everyone has a record that they put on and it makes them want to go for a skate, like the first Face to Face record ‘Don’t Turn Away’. It’s a vibe I guess, growing up those are the records that stay with you forever and we’d love to think that someone out there is skating to our record.

What’s your ultimate goal as a band?

Stay friends, make the best music we can and play as many shows as possible.

What do you think is your biggest achievement to date?

We lived in a small 4 bedroom, 1 bathroom apartment with 10 people (more at times) for 10 months and are all still great friends so I think surviving that is our greatest achievement.

How has the UK treated you on your visits here so far? Have you got any plans to return soon?

Awesome. We love the UK. Great beer, great people, great music. We hope to be there as soon as we can hopefully before the year is out.

What does the near future hold for Violent Soho?

We are going back home to Australia to do a small tour then we get to play in Chicago at Lollapolooza and then go on tour with Mondo Generator which we are pumped for always been a big fan of Nick Oliveri.