The Young Veins were spawned last year following Ryan Ross and Jon Walker departing their former band – Panic At The Disco. The result of their musical endeavours since leaving Panic (Ross was the main songwriter of the band) are documented in The Young Veins’ debut album ‘Take A Vacation!’ Reminiscent of 60s acts like The Beatles and Beach Boys, the album is a summer journey of epic proportions and has the potential to become the soundtrack to anyone’s summer. It’s hard to believe that frontman Ryan Ross is so young having written such sincere and well-crafted songs as those present on this album. We caught up with him to hear about the process behind the album and what went into making it.

It’s been just under a year since Jon and Ryan left Panic At The Disco. That seems to be a fairly short time to form a completely new band, write an album’s worth of material, get it recorded, find a label and release it. How did the progression move along so quickly? I’m guessing it was a smooth transition?

It was a smooth transition because Jon and I had been working on material all along. We only had to write a few more songs after the split in order to have enough for the album. The hardest part was trying to find a good band after the album was finished. We had friends play what we couldn’t on the album but they already had other things they were doing on their own and wouldn’t be able to tour with us. Once we did find the other guys it started to feel like a real band.

How long did it take to write and record?

It’s hard to say exactly because we never really sat down to just write for this album. I’d say Maybe about 4 months total though.

Any interesting tales from the studio? What was the atmosphere like?

The atmosphere in the studio was very enjoyable, we had friends around helping and had a good idea on what we wanted things to sound like before we ever started recording. I think that alleviated a lot of would-be stress.

Your debut album ‘Take A Vacation!’ is very evocative of Southern California. How did your experiences of that part of the world influence your sound and lyrics?

Funnily enough, I don’t think any of the songs that mention the beach or ocean were written in California. I think the only ones we did there were “Change” “Capetown” and “The Other Girl“. I think if anything, for me, moving to California was just a change of scenery.

What sights and places would you advise people to visit when in Cali?

There’s a place called Point Dume up the coast. It’s one of our favorite places to go, you can climb up on the Point and see for miles out into the ocean.

Can you name one song by another act that sums up what California means to you?

That’s a tough one, I guess I could say that as a child, the first song I think I ever remember hearing and singing along to would be “Catch a Wave” by the Beach Boys. I had this image in my head as a kid that if you went to the beach in California they’d be there in the sand playing it. 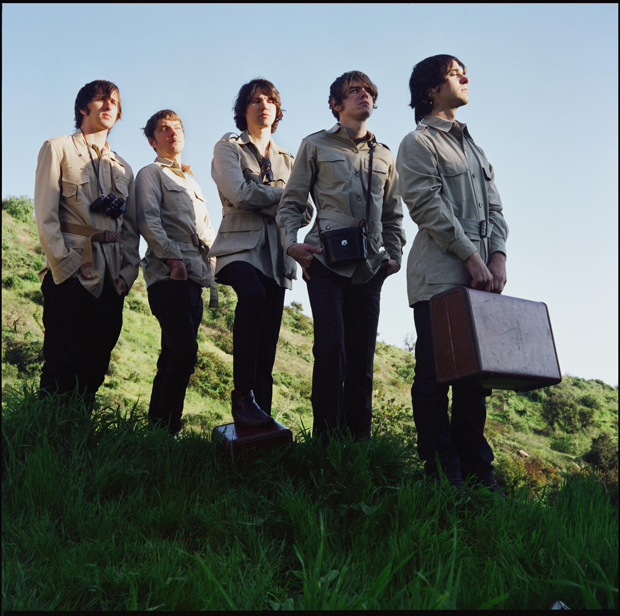 The record also touches on experiences in other countries across the world, presumably from touring experiences. Who was the girl in the song ‘Cape Town’?

If I gave away everything there would be no room for imagination, no mystique left!

Any UK-centric experiences influence the album?

Unfortunately no, we haven’t been across the pond in so long! I’m hoping we get there soon and I’m sure there will be lots to write about.

What are your Top 5 parts of the world?

Ah, well based on places I’ve been, in no order: South Africa, Australia, UK, Europe, and the Pacific Northwest of the U.S.

There are clearly some very strong influences from legendary bands such as the Beatles and Beach Boys on ‘Take A Vacation!’. How did you go about reconciling their musical influence on the band with a more modern day feel and your own stamp of originality?

I don’t think we try to emulate any of our influences, the whole idea is to use what was there before you and make it your own. All the greats have failed at copying their idols.

How do you feel about anyone who insists on comparing The Young Veins to Panic At The Disco?

I guess you can compare it however you want. I’m not sure what good there is to get from it though. I don’t see why, if you’re going to compare it to Panic, then why you shouldn’t compare it to whatever else is out there.

When are you planning on bringing your live show to the UK? Do you think it will be in support of another act, for festivals or straight in as a headline act?

There’s been talk of coming over sometime this summer, the album comes out soon so I think after that happens we’ll start looking at things. Unfortunately I think we missed the cut off for the festival season which is too bad because those are always a ton of fun. If it’s up to me we’ll be there as soon as we’re done with this tour in the States.

Who would be your ideal touring buddies?

Well we’ve been trying to do something with the Like since before either of our albums were out so hopefully that can happen soon.

The Young Veins release their debut album ‘Take A Vaction!‘ in the UK on July 5th.