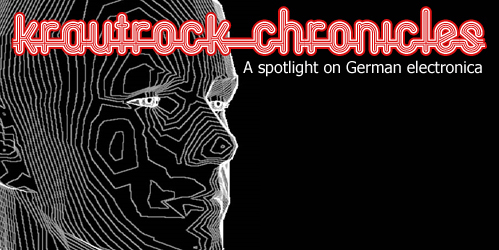 The composition of Krautrock music is usually born out of endless drug-fuelled jamming sessions, where artists use anything from a keyboard to the smashing of a cricket bat against a trouser press.

The sound came to life when it introduced more electronic elements, swapping guitars for keyboards and the newly invented synthesizer, which had more knobs than a Kasabian gig. Nobody before was making electronic music, but in the late 60s Krautrock sprung to life.

Munich band Amon Düül II are credited as being the original Krautrock band. They took the Krautrock torch in 1968 when people were repulsed by their sonic, acid-drenched sound. Some people however, sat up and took notice. Berlin band Cluster were also influential, creating music that makes Ziggy Stardust look like an accountant.

Band’s like Can, Faust, Neu! and Tangerine Dream all flourished with this new style of music but it was another band from the town of Dusseldorph who took the title as kings of krautrock, that band was Kraftwerk.

Kraftwerk scrapped guitars altogether and consisted of four keyboard players, making the music purely electronic. They made the beat monotonous and the sound minimal, but the music was still melodic. To say they were ahead of their time is an understatement. To think that they were doing in the 70s what everyone was doing in the 80s, but better, is a testament to their innovation. They also became the first Krautrock band to bridge the commercial gap between Germany and the UK.

Krautrock went on to inspire the British post-punk scene that started in the late 70s and then the electronic boom in the 80s. You can hear its influence in modern bands as well such as, LCD Soundsystem, The Mars Volta, Deerhunter and Radiohead, who themselves cite Krautrock bands Neu! and Can as influences. Perhaps then we should give something back to the Germans. Do they like Razorlight?

Here are five tracks that define the genre of Krautrock…

At just under 23 minutes long, ‘Autobahn’ is littered with breakdowns and building melodies that pump through your entire body. The song is constantly changing in pace, replicating a journey on the Autobahn. The gleaming keyboards and pulsating beats fill you with vitality. A truly inspiring work of art.

The bands first single in 1972 epitomized their early sound. The beat described as ‘Motorik’ by journalists and ‘Apache’ by frontman Klaus Dinger is both mechanical and punchy, whilst the guitar is riddled with fuzz. This accompanied by the ghoulish wailing vocals makes for a uniquely brilliant track that makes you want to batter the nearest object in time.

The title track from their groundbreaking debut album, which translates as ‘god’s penis’, is a 20 minute long eruption of sound. There is a sense of spontaneity with every change in tempo that just feels right. It’s experimental in every sense of the word and contributes to the very album that created Krautrock.

Tangerine Dream were one of the bands that managed to bring Krautrock to England, playing in cathedrals and sometimes in complete darkness. This 1976 instrumental showcases their elaborate use of electronics. At this point in Krautrock history the synthesizer was being mastered and Tangerine Dream demonstrated on this track that some extraordinary things could be done with one.

Well we couldn’t really compile a list of Krautrock songs without putting this one in could we? Despite later distancing themselves from the term, Faust must have once been caught up in the Krautrock movement to name a song after it. That said, it really does encompass everything the genre stood for, it’s as far detached from Germany’s preceding pop scene as anything will ever be.

If you think Mark missed any classics from this latest Chronicles then let us know in the comments below.