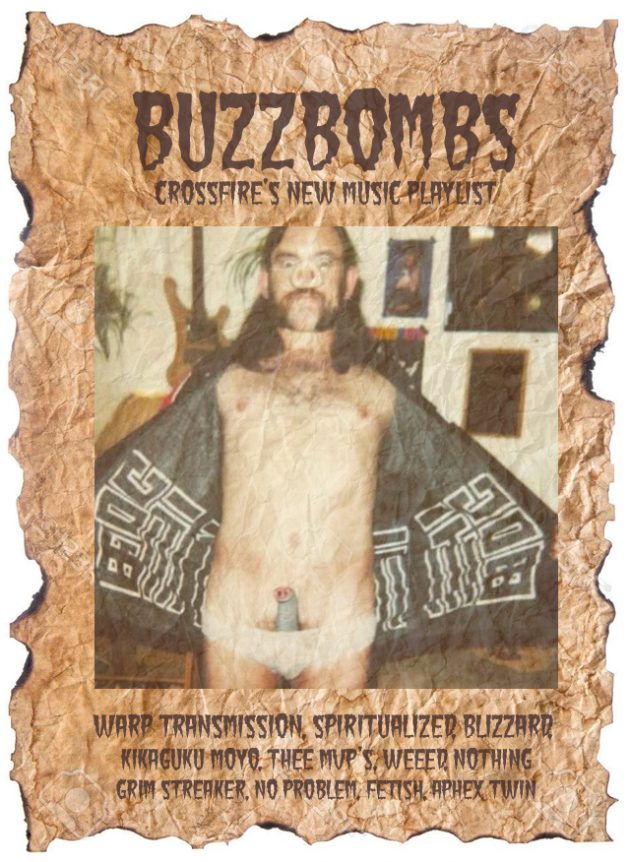 The welcome return of Jason Pierce’s songwriting does not disappoint. No space rock here though, but who needs it when a tune is this good? Absolutely beautiful work. (Z)

NOTHING – The Carpenter’s Son (Relapse)

It doesn’t get darker and more personal than this tranquilized lullaby by US shoegazer’s NOTHING. This is the most solemn cut on their new album Dance on the Blacktop out Aug 24th. Dig it out. (Z)

Expect a large dose of heavy psychedelic shit from Portland rockers, Weeed. Once you get through the long af intro of didgery-dont’s, they thump out some great stoner stuff, kind of like The Sword on shrooms. (Z)

If you search through the Tokyo psych scene you will no doubt hear amazing feedback on Kikagaku Moyo whose new track delivers 70’s inspired stoner vibes with a beautiful Asian feel that seems to refresh the usual American approach to this genre. Search through their Bandcamp for more ahead of the release of a new vinyl offering called Masana Temples where you will find this tune. (Z)

Time to step up the noise. This album absolutely rips when it’s in full flight and can drop a bongload of chill on a dime. It’s like Hawkwind, Mudhoney and Monster Magnet in a fight to see who can eat the most PCP left on the table at times. Finnish psych/stoner at the highest levels. This tune kicks off a seven track must listen. Go find it and buy it….Yeah, actually own it. (Z)

Rampant hardcore featuring the people behind DIÄT and HEAVY METAL. The sound of your last breath before drowning as a shark takes both of your fucking legs off. Intrinsic, chaotic and absolutely out of control. (Z)

Best video of the year so far? A contender for sure. Cannot wait to find a post with all of this messaging decoded. For me, it’s an ode to the biggest world power war happening right under our noses, right now, you will just have to look harder and deeper every night to see it all happening around you. (Z)

The MVPs ain’t taking shit no more. they figured it out. Thank fuck for that! They wrote a song about it in celebration. Turn it up and make sure you see them live as they are a very good band to see up close and personal. (Z)

This NYC/Brooklyn band have the sneer, the beat rips and also carry a slightly gothic edge on some tunes from their past catalogue giving their sound an open road for their debut LP. Keep an eye on their activities if this floats your boat.

No Problem are a Canadian punk band from Edmonton, Alberta, who just completed a short UK tour where they proved to be one of the highlights of the recent Bloodstains festival in Leeds. If you like bands such as The Wipers, Red Dons and the Observers, then you are going to fall head over heels in love with No Problem’s high-energy, echo-laden garage punk attack. They’ve already released three albums on the consistently reliable Deranged Records and ‘Let God Sort ‘Em Out’ is the latest and best of the three. In need of a fresh punk rock buzz? No Problem, they got it. (JS)

When it comes to breeding vicious, dark hardcore punk, Portland, Oregon on the pacific northwest has always had an edge. And that edge just got sharper. Fetish feature former Poison Idea drummer Thee Slayer Hippy and guitarist Vegetable, playing together for the first time since the ‘War All The Time’ album three decades ago, alongside 3/4 of local punk heroes Long Knife, with later PI guitarist Brandon Bentley. It is, as you would expect, fast, furious and ferocious, propelled by Slayer Hippy’s legendary rhythm attack. A full album is due for release later this year, but in the meantime, strap this on for size. (JS)

If you’ve not discovered the Brown Acid compilations from Easy Rider Records yet and dig that 70’s garage fuzz and proto metal sound then await their 7th offering coming this Halloween. This Blizzard track from 1973 is for the Hendrix lovers for sure. (Z)

This is journey-man driving music that should be the soundtrack to a skateboard video at some point. The no vocal approach works a treat for this Danish psych outfit that can jam out the dirge with happy synth parts, searing solos and colossal beat work. (Z)