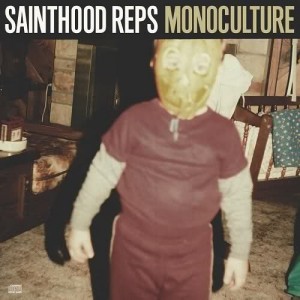 The debut from Sainthood Reps is at times lush and dreamy, at times a full-on barrage of riffs, but always beautifully chord crunching and satisfyingly grungey. Guitarist Derrick is also in Brand New and the sound of BN’s last two albums (and the Long Island scene in general) is certainly recognizable within the Sainthood Reps texture.

However, SR take the quirkier side that Brand New have toyed with in recent years and just run with it. It’s hard to describe Monoculture as anything other than a great rock record, thus it has evaded any pesky “emo” stereotyping where Brand New will forever be plagued by that term and its now-negative connotations.

Monoculture kicks off with serious intent and an absolute belter of a riff that demands to be played loud. The vocals join the fray with an angry swagger which grips you from the get-go. This album is filled to the brim with crushing riffs and crashing drum patterns but there are also moments of sincerely silicate beauty.

‘Hotfoot’ is the perfect representation to both these sides of the band, showcasing both the Jekyll and the Hyde if you will. There’s an insistent and relentless feel throughout this album and even when the quiet beauty surfaces, it’s always accompanied by a menacing undertone where you can’t quite figure out what’s coming next or when the huge guitar riffs are going to come thundering back in.

Parts indie rock, parts grunge and parts something you can’t quite put your finger on, this debut is a wholly satisfying listen. Sure, most of the elements are not totally original, but the way Sainthood Reps have crafted the elements has produced something almost ethereal. This is really an intense yet listenable rock record with both hooks and plenty of intrigue. Hopefully we’ll see a lot more of these guys in the future.