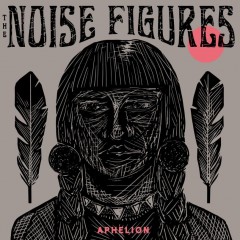 A two-piece making serious noise isn’t so rare these days but the power to keep you gripped for the full length of an album is really something of a treat. Reminiscent of Black Rebel Motorcycle Club’s bruised blues and Death From Above 1979’s hardin-your-guts riffs, Aphelion takes the listener on a multi-paced journey through a desert of brooding intensity, with raw fuzzed-out energy and tender desperation leaving you bloodied and beaten but feeling all the better for it.

Highlights include ‘Shoot The Moon’ with its opening riff sounding as gritty as worn boots trudging through gravel, this dusty opener sets a hypnotic pace for the rest of the album to grind along to. The title track’s spaciousness and sluggish pace conjuring images of scorched earth and desperate lips begging for the first rain on arid plains, though ‘Blood’ stands out as the ultimate peak. With its ternary structure of polar paces, the second half of the bridge takes a beautifully dark tumble into madness before plummeting back in to close with lightening force.

Aphelion is an exceptional collection of formidable tracks that evoke epic imagery throughout with The Noise Figures’ attention to detail being the catalyst. All music was recorded to tape in the short space of an intense five days and, instead of settling for universal tuning, the band experimented at 432Hz. A fairly uncommon method (aka Pythagorean tuning) giving the album an undeniably fresh edge.

The Noise Figures certainly give other dynamic duos a run for their money and without doubt they are one to watch out for with this awesome addition to their catalogue. They’ve built their launch pad, so here’s hoping they’ll use their third release to shoot these Greek titans into the sky.

Out now on Inner Ear Records, purchase a copy of Aphelion here.