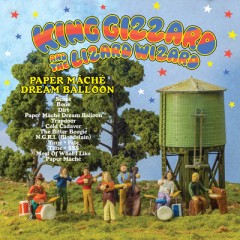 King Gizzard & Co. are a band that know no sonic boundaries. Flitting between solid garage rock, kraut-driven wig outs and potent swamp-boogie’s alike on their previous six records, there’s only one theme throughout and that’s to take your mind on a psychedelic trip to remember, every time.

Whatever instruments they find themselves tooled up with, be it warped organ tones or screaming harp riffs, this seven-piece promise to take you on a joyride. And they’ve delivered the goods again with Paper Mâché Dream Balloon. As opening track ‘Sense’ glides in you’re greeted by softly focused clarinet lines and beautiful piano chords, altogether creating something unexpectedly mellow, and far removed from their standard 16-minute psych-out fare, see ‘Head On/Pill’ or the recent Quarters EP, with each of the four clocking in at 10 minutes 10 seconds a piece.

Here you’ll search high and low for a track that barely crosses the four-minute line, there’s only one, ‘The Bitter Boogie’, and it’s a total gem. Albeit curiously un-bitter as it rolls and tumbles past pleasingly familiar swamp-blues territories, with a hefty tip of the hat to their Californian forefathers as they segue into yet more harmonica-honking goodness on ‘N.G.R.I (Bloodstain)’. Is that a sitar noodling away in the background too?

With each of the album’s twelve offerings recorded using nothing but acoustic instruments, this LP is a justification, not that one was ever required, of why King Gizzard & The Lizard Wizard repeatedly warrant your ear. Strip away the cooking tube amp distortion and there’s marvellous, accessible song writing to be found, yet remaining forever psychedelic. If you thought the flute was just a fad, you were so wrong.