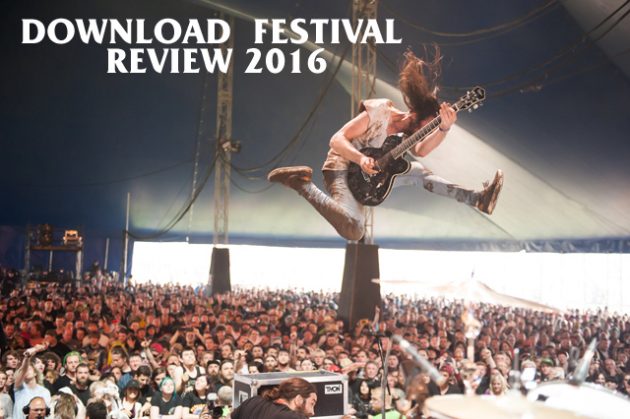 Damn, that was a fun three days, despite some traditional British weather making an unwelcome guest appearance! Yep, Donington Park’s annual rock and metal bash recently celebrated its 14th birthday, and Crossfire was there to soak it all up (the music, that is). Here’s how things went down…

ROYAL REPUBLIC singer/guitarist Adam Grahn’s confidence borders on cockiness, but that’s forgivable for a band armed with songs as good as ‘Make Love Not War’. Whether dispensing between love-life advice, or leading the crowd through a stomp-tastic rendition of ‘Full Steam Space Machine’, the Swedes provide an entertaining and explosive start to Download 2016.

It doesn’t take long for the heavens to open, to the annoyance of most – but not all – people here. “Thanks to the rain for bringing you all in here, and to Babymetal for being a novelty act, so no-one wants to watch them!” declares HECK frontman Jonny to a packed Maverick Stage tent. Who’d be Heck’s manager? Clearly unafraid of ruffling a few feathers, the guitarists spend most of the set either in or on top of the moshpit, to the soundtrack of possibly the finest twisted hardcore attack this side of Converge. Amazing. 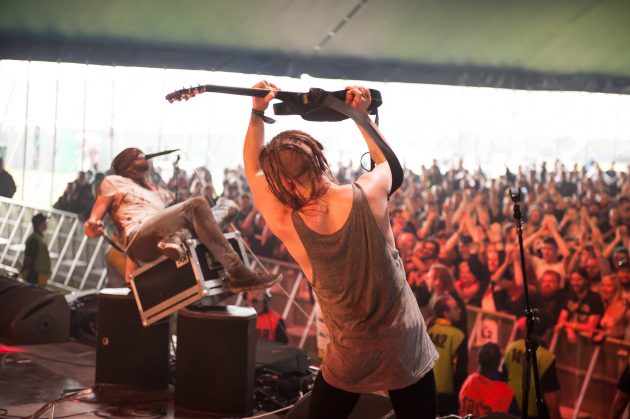 Back on the main stage, KILLSWITCH ENGAGE are delighted to be back at Donington, and have little trouble whipping up one of the weekend’s gnarliest pits. Guitarist Adam D is still the foul-mouthed court jester of metalcore, and although a couple of cuts from recent LP ‘Incarnate’ sound great, it’s a triple whammy of ‘My Last Serenade’, ‘Rose Of Sharyn’ and ‘The End Of Heartache’ that hits home the hardest.

“We’ve been told not to incite any moshpits…so no moshing!” cackles HAVOK vocalist David Sanchez, a man who speaks rather like Steven Tyler on amphetamines. Amusing, yes, but he and his band are seriously good at injecting fresh vitality into tried-and-tested thrash sounds, and the likes of ‘Living Nightmare’ are greeted with the kind of frenzied circle pits they deserve.

MOTORHEAD were due to play third from top on the main stage, which has been renamed the Lemmy Stage after Mr Kilmister’s sad passing at the end of last year. Rumour had it that some of his old friends and bandmates would get together at Download to jam through a few ‘Head classics, but the reality is far less exciting – nothing more than the stage-side video screens showing some old Motorhead festival performance videos, interspersed with some interview clips, mainly from the ‘Lemmy’ movie. Better than nothing, admittedly, but you can’t help but feel that both we and he deserved more.

Thankfully, THE WILDHEARTS are here to provide some (not quite so) old-school rock n’ roll thrills. The rain appears to have let up, but much to Ginger’s delight, the Maverick Stage tent remains packed, and that’s understandable when classics like ‘Nita Nitro’ and ‘Everlone’ sparkle as brightly as they ever have. 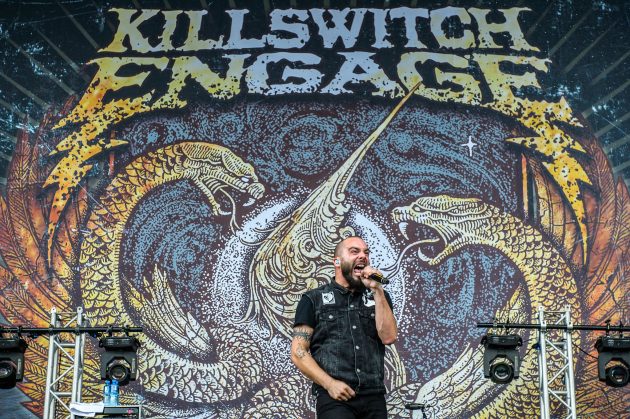 And so it’s back to the Lemmy Stage for RAMMSTEIN, the first of this weekend’s headliners. The German industrial metal titans steal the show with almost frightening ease; be it vocalist Till Lindemann’s Charlie Chaplin-esque entrance, the onslaught of pyrotechnics during a thunderous ‘Du Hast’, or a surprisingly effective (and affecting) semi-acoustic rendition of ‘Ohne Dich’, this is about as great a marriage of song and spectacle as you could hope to witness at Download. It’s a bit of a shame that they’ve toned down the more, shall we say, homoerotic elements of the stage show, but they sound magnificent throughout, and as we head back to the campsites, no-one’s complaining.

Saturday starts much as Friday ended – theatrically. Swedes AVATAR are dressed like The Joker’s unholy marching band, and easily win over the curious with some genuine anthems in ‘The Eagle Has Landed’, and closer ‘Smells Like A Freakshow’. Over at the Encore Stage, all five members of SANTA CRUZ look like the lovechildren of Michael Monroe, and remain as gloriously in thrall to 1980’s Sunset Strip glam rock as ever. “Who wants to fuck tonight?” screeches vocalist Archie Kuosmanen, a man whose spirits have not been dampened one iota by the rain. Sounds like fun, dude!

It isn’t until TURBOWOLF take the stage, however, that our day truly kicks into gear. The Bristol crew may be buried halfway down the Maverick Stage bill, but they play with all the confidence and swagger of main stage headliners. Chris Georgiadis is a true master of ceremonies, leading his band through gems like ‘Rabbit’s Foot’ and ‘Solid Gold’ with no little panache, and as the tent fills up, you can’t help but feel this should be the start of something big.

Over to the Dogtooth Stage now, to see what the musical yoof are up to. MILK TEETH don’t waste a second of their painfully short slot, getting the whole tent bouncing like it’s 1992 with fuzzed up grunge-pop gems like ‘Vitamins’. DEAD! have something of an identity crisis going on, hopping from power-pop to hardcore to funk-punk (plus various points in between), but deliver it all in a gleefully snotty, carefree way. 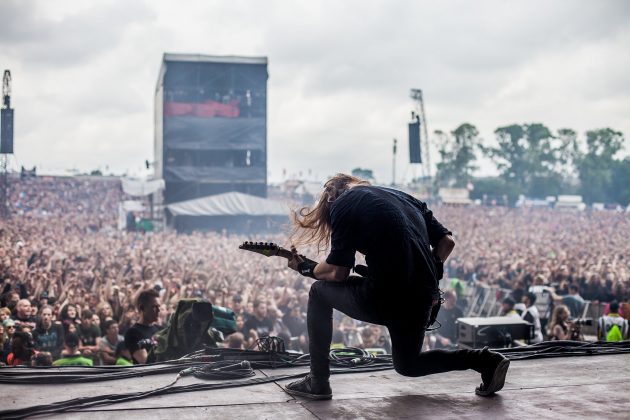 MEGADETH’s set, like their recent ‘Dystopia’ album, sees Dave Mustaine and co back to their snarling best. Predictably, recent cuts like ‘Post American World’ go down almost as well as classics like ‘Peace Sells…’, but there’s an extra surprise in store; namely, the appearance of Nikki Sixx for a (admittedly ramshackle) cover of the Sex Pistols ‘Anarchy In The UK’. “Hell has frozen over!” declares a grinning Dave. 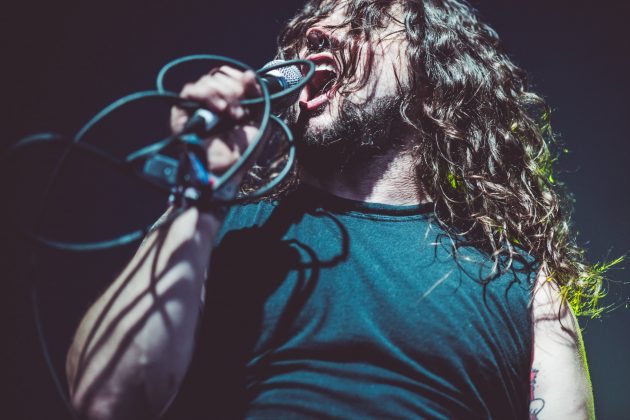 The rain has started again, but the thrash party doesn’t stop – it merely squeezes itself into the Dogtooth Stage tent for MUNICIPAL WASTE’s first UK show in four years. The band sound like they’re channeling a new-found hunger as they rip through what seems like 50 songs in 40 minutes, and their irreverent sense of humour remains intact, with ‘I Want To Kill The President’ reworked as ‘I Want To Kill Donald Trump’. Oh, and they deservedly get the circle pit of the weekend.

As annoying as the rain can be, it seems appropriate enough for BLACK SABBATH’s final UK festival show, and it lends their opening self-titled anthem that certain extra gravitas. Considering all the mockery directed at Ozzy Osbourne during (and since) that awful reality show, he truly seems in his element tonight, doing what he does best with a gigantic crowd firmly on his side. Sure, he’s a little off-key for the first few songs, but that matters little when Tony Iommi’s riffs sound ten times as imposing as they do on record. Wisely sticking to the classic early stuff, Sabbath barely put a foot wrong tonight, and the sound of thousands of voices singing along to the likes of ‘Iron Man’ and ‘NIB’ will surely linger long in the memory.

“Let me here you shout ‘One more song’!” cries Ozzy, following the penultimate ‘Children Of The Grave’, and the place goes utterly nuts as the band launch into ‘Paranoid’. There’s a certain sadness to knowing we’ll never see them here again, but also a sense of pride in seeing the gods of British metal conquer a festival that probably would not exist, had it not been for their pioneering early 70s work. Gentlemen, as you sail off into the sunset, we salute you. 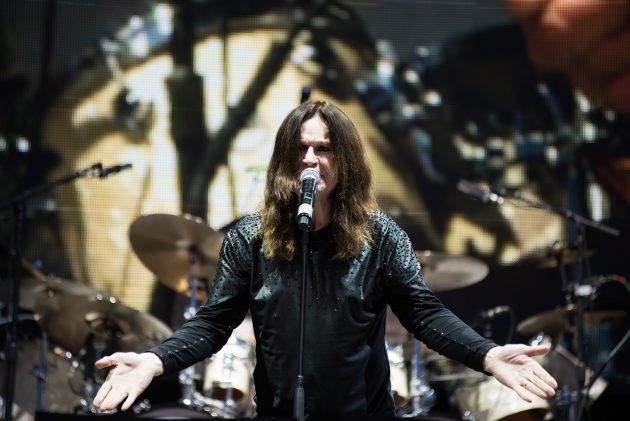 MONSTER TRUCK and their riffs seem like they’d work better at a Deep South chili cook-off, but they still sound pretty good in a mud-soaked East Midlands field. Sleepy heads nod respectfully as we all wonder how bare-chested guitarist Jeremy Widerman can be so perky at this ungodly hour.

AMON AMARTH give this weekend’s main stage headliners a real run for their money in terms of stage show. Armed with two huge dragon’s head props that regularly spew smoke, along with a decent helping of pyro, they stomp their way through ace Viking metal anthems like ‘Raise Your Horns’ like a true band of the people. Magnificent, and deserving of a far higher slot next time around. 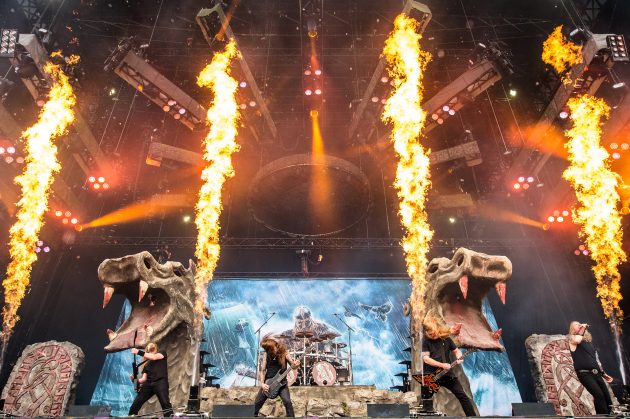 WITCHSORROW play quality doom metal, and for half an hour, they turn the Dogtooth Stage tent into their own dark church, full of baying acolytes whose appetite for monolithic riffs was clearly not completely sated by Sabbath. The band sound great, and have surely converted a few more to their cause. We wander out for a while, and catch the last couple of DELAIN songs; Dutch symphonic metal that proves oddly catchy, even as the weather continues its onslaught.

There isn’t a single dull moment during FRANK CARTER AND THE RATTLESNAKES’ set, with no little credit due to the man himself. Whether singing atop the crowd (or in the middle of it, for a poignant ‘Beautiful Death’), telling stories of past circle-pit injuries, or getting the power cut for inciting a wall of death, he’s the perfect frontman for the Rattlesnakes’ fury-fuelled anthems. ‘Juggernaut’, in particular, sounds utterly unstoppable today, and the sing-along to the closing ‘I Hate You’ could make Maiden blush. 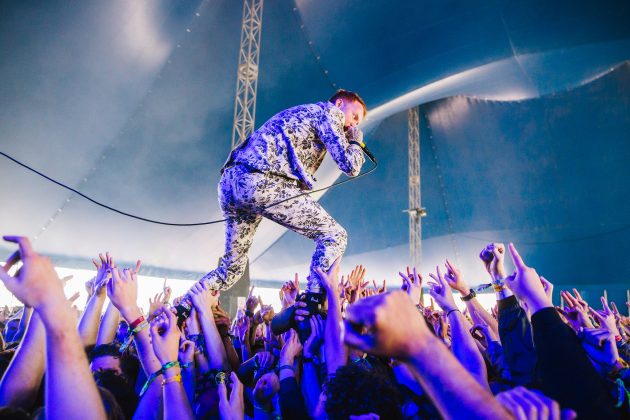 ELECTRIC WIZARD boast some of the best non-Iommi riffs of the weekend, and hone them ever further during their monstrously slow and heavy set. They also get bonus points for drowning out the sound of Disturbed frontman David Draiman croaking and hacking away on the main stage. Now there’s a man who needs more fibre in his diet.

The day is drawing to a close, but BILLY TALENT aren’t about to let us slack off. “I know you want to go home, get in the bath, jerk off and watch Game Of Thrones – so do I!” Thank you, Ben Kowalewicz, for arguably the quote of the weekend. And thanks also to your band for firing on all cylinders – ripping through the likes of ‘Red Flag’ and ‘Fallen Leaves’ like the punk rock warriors you are – despite having more than enough great tunes for a perfunctory ‘Greatest Hits’ walk-through. 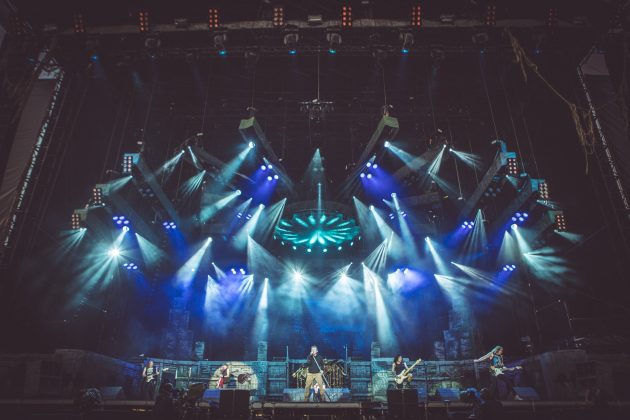 The Main Stage crowd rise en masse from their soggy camping chairs as UFO’s ‘Doctor Doctor’ booms out from the PA – a sure sign that IRON MAIDEN are about to kick off. To a degree, your enjoyment of tonight’s set depends on how familiar you are with Maiden’s recent ‘The Book Of Souls’ album, although the affecting, Robin Williams-inspired ‘Tears Of A Clown’ impresses old and new fans alike. Bruce is in fine form (if we had a shot of whiskey every time he shouts “Scream for me, Donington!”, we’d never make it back home alive), and there’s a veritable feast for the eyes, too – with various props from the ‘Powerslave’ era wheeled out, along with all manner of Eddie-related antics.

The second half of the show sees an onslaught of hits; ‘The Trooper’, ‘The Number Of The Beast’ and a closing ‘Wasted Years’ all received like old friends by a crowd that’s exhausted but damned if they’re gonna fold before Download 2016 does. Semi-regulars on the festival circuit they may be, but Iron Maiden still create a sense of occasion whenever and wherever they play, and tonight they close proceedings in fine style.

Overall? Download Festival 1, weather gods 0 (but, y’know, full marks for trying). Here’s to 2017, whatever it may bring… 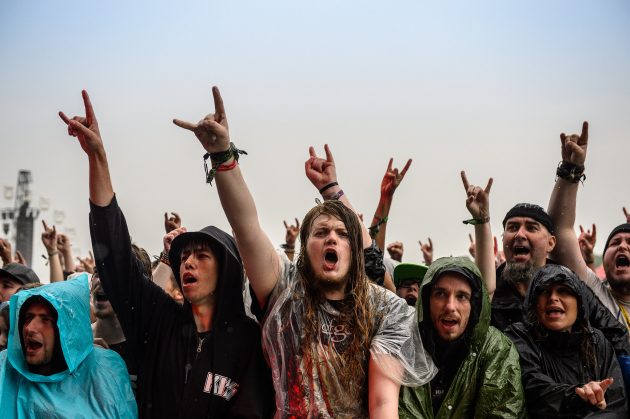