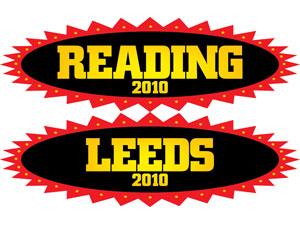 Reading and Leeds festivals are always the big ones of the summer. Somehow bittersweet as it’s always a blast yet kind of signifies the end of the summer. Yes, there are still a couple of festivals lurking in the corners of September but R+L just seem like the culmination of summertime musical events before the Autumn touring onslaught begins. And what a climax! People always rubbish the line-up before really looking at it. The truth is that the majority of people are going to find something that tickles their fancy within this immense bill of bands.

We’ve picked out a few who could well be worth your time. Now, this is a bit of a mammoth list. And it’s not even all the bands who’d be on our list if there were no clashes and an infinite amount of energy to see as many bands as you wanted. This is merely a suggestion of how you could spend your precious hours at the festival if you’re stuck for activities (as if). Shame on those people who never leave their tents due to an alcohol/drug induced semi-coma!

There’s often a bit of a wildcard as the opener of the festival but, whilst Young Guns will be unknown to many a festival-goer, they’ve truly earned their place on the bill here this year. Releasing their debut album totally independently and starting to sell out venues across the country, they’ve achieved a lot and this will be a fitting end to a busy summer for the young Brits!

ADTR play a bombastic pop-punk/hardcore hybrid type of music that shouldn’t really work but just kind of does. They’ve built up a solid fanbase over here despite being from the US so expect their followers to be out in force despite the early set time!

PABH’s set is not to be missed. Always raucous, amusing and crammed with deafening riffs, the band’s live performance is steadily building them a reputation as one of the UK’s most exciting new acts. In fact, we’re kind of surprised they’re not billed higher on this stage… Still, maybe this timeslot will provide them with a bigger crowd. Let’s hope so!

Now, I’m really not an advocate of ska in general. But Streetlight Manifesto are some of the best musicians who’ll be present at this festival. And their music is super-happy but still manages to avoid being really grating like a lot of ska music ends up being. Top notch.

Fast becoming big hits in the world of Radio 1 DJs (and their ever-increasing fanbase, of course), Blood Red Shoes’ latest single ‘Heartsink’ has been catching many ears and the Brighton duo look set for a triumphant set as their run of European festivals brings them back closer to home at Reading and Leeds.

Phoenix are those French wonders with the awesomely poppy ditties that get stuck in your head without being the slightest bit annoying. You can’t say that about a lot of catchy music. You may recognize their work from many a Sofia Coppola film; she is going out with the singer after all.

The Walkmen
Main Stage (12pm at Reading and Leeds)

Moody indie-rock to kick-off the day? Why not! The band will no doubt be dosing out fan favourites such as The Rat along with choice cuts from forthcoming album ‘Lisbon’.

Punk rock doesn’t get much better than this. Paint It Black’s lively approach will be exactly the thing to fuel you with music-oriented energy for the rest of the day.

More stellar punk rock from one of the best Lock Up Stage line-ups of recent years. These Californians know a thing or two about entertaining a crowd. If you’re near the front beware of mic cables, spit, puke and flying bodies.

The Gaslight Anthem arrive on the main stage following their past two years enthusing crowds in tents at Reading and Leeds. This will be one mighty singalong with the band breaking out a mixture of ‘American Slang’ hits-in-the-making alongside solid favourites from ‘The 59 Sound’.

Not the best kept secret in festival history but The Rats will actually be Gallows performing an early set in the midst of some other brilliant acts looking to emulate their cult success. Going by their other festival sets so far this year, it’s going to be a fun one and, judging by all their friends’ bands playing on the same day, there is likely to be a guest appearance or two.

Quirky is not our favourite word here at Crossfire. But Modest Mouse could well be described as such with tracks like ‘The Ice of Boston’ and ‘Paper Thin Walls’ proving their rare spark of originality amongst a sea of middle of the roadness.

Cancer Bats’ recent cover of Beastie Boys’ Sabotage was a triumph and seemed to broaden their appeal further from their already loyal fanbase. Get ready to growl along with frontman Liam Cornier the immortal words – “Let’s do this!” – as the band crank out their own ‘French Immersion’ alongside said awesome cover version.

The Get Up Kids recently made their long-awaited return to the UK which included two shows at Camden’s Underworld. It will be a delight to see them back on a bigger stage, no doubt with a rapt audience heartily singing back every word, probably louder than the band themselves.

A fitting headliner for a stage with such a bill, Bad Religion’s recent return to the fore meant they were a natural choice. Classic punk, delivered with as much vigour as ever.

Sure to be a bizarre but exciting experience to kick off your Sunday, Foxy Shazam have already been making waves across the Atlantic with their eccentric musical sensibilities and have supported the likes of Hole over here. Definitely ones to watch.

Like a Blink-182 for the next generation, All Time Low are sure to provide some ‘LOLZ’ as the kids would call them. They’ve also got a fair few catchy singles under their belt so you may even find yourself singing along.

You Me At Six are kind of like All Time Low’s UK counterparts though the maturity evident on this year’s album ‘Hold Me Down’ suggests that they take themselves a tad more seriously. As well as the odd heartfelt ballad, You Me At Six also have melodic pop-rock tunes aplenty.

A little early in the day for a bit of Bizkit perhaps… Actually, who am I kidding? You’ll have had a few drinks by this time so this will be mighty fun. Hopefully they won’t play *too* much new stuff.

Much-loved in many circles, Weezer songs have the ability to unite fans of all musical persuasions. This will no doubt be one of the uniting sets of the weekend. Never ones to dwell on old material, we’ll most likely be hearing a fair portion of forthcoming album ‘Hurley’.

Having dived headfirst into the mainstream this year with banger ‘Could This Be Real’, the D&B DJ has roundly dropped jaws on his travels including the support slot on Pendulum’s recent Arena Tour. Guaranteed to deliver one of the most fun sets of the festival, he’s definitely one to go and check out.

The Dubstep Supergroup of Benga, Artwork and Skream have already slaughtered all that came before them across the UK’s festival circuit and will no doubt be tearing the tent apart when they step up on the Sunday. If you’ve got fillings, false teeth or wear a wig, it might be best to bring some superglue or the basslines are going to cause havoc.

You may guffaw but Paramore are an incredibly talented band who’ve now unleashed quite a sizeable amount of stellar songs. It’s a fact that’s undeniable and they’re sure to sound as solid as ever as they take on the main stage.

Always entertaining, even if they don’t actually end up playing that many songs, this is a good chance to catch WAS on a smaller stage following their ruling of the main stage a couple of years ago when they played a cover of Ace of Base’s ‘All That She Wants’. Classic.

Traditionally rather on the infantile side of things in the nature of their performances, it’ll be interesting to see how a mature Blink-182 handle the headline slot following their recent reunion. Will there be as many puerile jokes? Equal amounts of unnecessary swearing? Who knows! But you can almost guarantee it’s going to be fun. And this band have plenty of hits to feed an eager crowd.