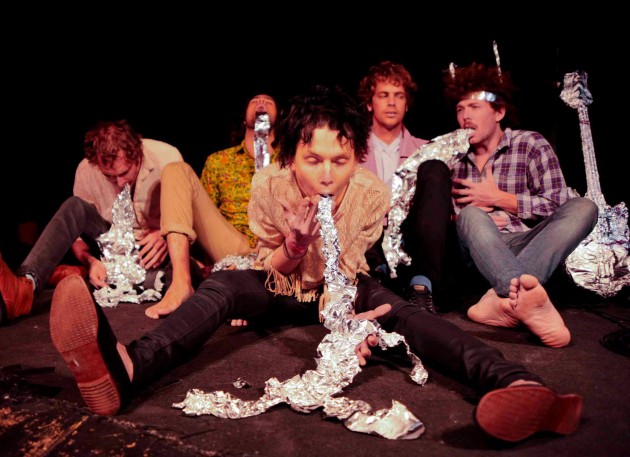 It’s Tuesday, it’s swelteringly hot outside and Koko is brimming with punters, each hankering for the Australian aural delicacies the two bands in question eagerly cultivate this evening. Melbourne slackers Scott and Charlene’s Wedding, and Perth noise merchants Pond are gathered in Camden to dish out a helping of their purest vibes.

Marking the end of their European tour, Scott and Charlene’s Wedding open the proceedings with their dazed, garage drawl. Surprisingly, their performance bares little resemblance to the shiny, twee sounds captured on 2013 LP Any Port In A Storm, with the band offering much rawer, off the cuff renditions of their material tonight. Kicking off with what sounds like early Beatles on grunge, frontman Craig Dermody delivers his slack, laid back vocal inflections with care-free charisma.

A punk-injected version of ‘Jackie boy’ reaches the apex of tonight’s set. Dedicating the track to its namesake –bass player and best friend to Dermody, Jack- the band carve out serious melodies and finally spark reaction from the audience as Koko begins to fill.

Ending with a Go-Betweens cover, Scott and Charlene’s Wedding pay homage to their Australian indie hero’s, bashing out their own extended version of ‘Karen’. During this drawn out ode, Dermody takes a moment to pay thankyou’s to his band, peers, label and friends, and judging by the unstoppable grin across bassist Jack’s face throughout the entire set, it’s clear that Scott and Charlene’s Wedding are tremendously stoked to be on stage tonight.

Pond deal with matters in a considerably different way. Greeting their swarming audience with gusto, this band starts as they mean to go on, with a big funky hand to the side of the face, garnering your fullest attention. When ‘Whatever Happened To The Million Head Collide?’ drops the whole place goes absolutely bananas, a chaos unfolds that doesn’t slow for one moment in their entire performance, with frontman Nick Allbrook tangled up in his guitar cables from the get-go.

Highlights of the set come with ‘Don’t Look at the sun or You’ll Go Blind’. The driving, pulsating throb of this track sends the crowd haywire, with un-comprehendible amounts of psychedelic funk spilling everywhere.

Now nine years strong, Pond are a band boasting phenomenal musicianship. Their riffs are desert sand hot, with every song oozing its own paint-peeling, psychedelic steez. Guitarist Shiny Joe Ryan interjects mid-way through the set, revealing that while playing in Manchester the night before, the band were advised that “London’s a tough crowd” to which he adds a triumphant “bullshit”, met with rapturous applause.

The ability to provoke movement in an audience without verbal encouragement is a rare power. There’s no coaxing and beckoning or winning of trust between band and crowd tonight, Pond are so phenomenally tight that everyone in the room feasts on their music alone, left in awe of their psychedelic presence.