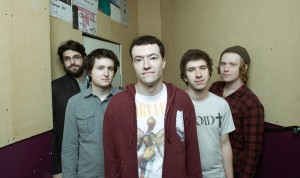 The label is a partnership with Deathwish Inc. and the frontman said of the deal:

“It’s an excuse to release different things that I fully believe in, whether it’s a record, book, video, etc. I have been lucky enough to spend most of the last few years traveling, and in my travels I have met a lot of talented people and seen a lot of fantastic bands that have influenced my decision to get this project off the ground.

When we were in Europe this last Summer I made the mistake of forgetting my music and books in our van back in the states. This lead to a lot of time to think about what else I wanted to do with my life aside from Touche Amore. I’ve always dreamed of working at a label, so what’s better than starting one with your friends helping you out?”

Single Mothers will be the first band to release on Secret Voice, with their self-titled EP, a song from which you can hear below: