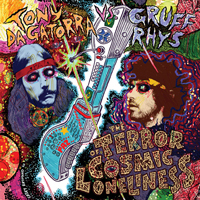 Eclectic Welsh musicman Gruff Rhys is set to release a new album with Tony Da Gattora on July 26th. The musical coalition between the Super Furry Animals frontman and the Brazilian inventor, video repairman and protest singer has been reported to be in the name of peace and stability.

You can listen to the new album, entitled ‘The Terror of Cosmic Loneliness‘ below via Soundcloud.

SFA fans be sure to check out our competition with Crayon for a chance to win some decks and clothes from SFA’s head art honcho Pete Fowler!