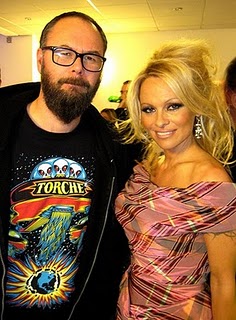 UK Thrashcore fiends will be stoked to know that Liverpool skaters Short Sharp Shock (SSS) have announced that they are about to go back into the studio to record their new album titled PROBLEMS TO THE ANSWER.

Liverpool’s most famous thrash band are so famous now that even blonde bombshell Pamela Anderson is said to be dating singer Foxy and is in a line of female celebs that include Cheryl Cole who can’t wait to make hardcore badges and whisper Black Flag lyrics in his ear whilst he is covered head to toe in poster glue. Finding a minute to himself in a local internet cafe to avoid the local paparazzi he posted the following message online this week:

“We’re back! Had to knock things on the head for a bit, but we’ve opened up shop again. Finishing the lyrics to the last few songs then next week we record some vocals with a special guest star! We finish recording the LP on March 1st/2nd, then mix for four days from the 4th March, then we’re DONE! Release date to be confirmed, but we’re looking at June/July. Looking forward to getting out again and touring. If you want us to play in your town, let us know.”

PROBLEMS TO THE ANSWER is being recorded at Whitewood Studios in the band’s hometown of Liverpool and is being produced by ROB WHITELEY and SSS bassist MARK MAGILL. Get in.