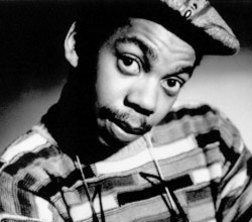 It is alledged that Smiley (real name David Emmanuel) stabbed himself to death when police officers entered his home in Warlingham, Surrey.The 47 year old was due in court after being charged with conspiracy to supply cocaine in September in Croydon last year.

Back in 1985 his cheeky tune ‘Police Officer’ became a top 20 hit and was a track that everyone sang in the playground. It was just one of those tracks you never forget. RIP.