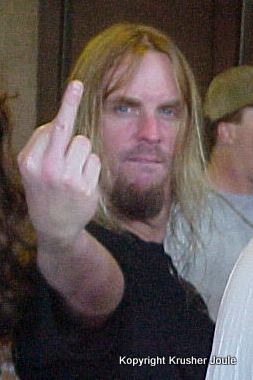 Slayer have announced that guitarist and co-founder Jeff Hanneman died yesterday after suffering liver failure. Hanneman was 49 years old, and passed in his Southern Californian home.

“Slayer is devastated to inform that their bandmate and brother, Jeff Hanneman, passed away at about 11am this morning near his Southern California home. Hanneman was in an area hospital when he suffered liver failure. He is survived by his wife Kathy, his sister Kathy and his brothers Michael and Larry, and will be sorely missed.

Hanneman was bitten by a spider 3 years ago and had a bad reaction to it leading to complications as explained on Slayer’s website: “There was talk that he might have to have his arm amputated, and we didn’t know if he was going to pull through at all. He was in a medically-induced coma for a few days and had several operations to remove the dead and dying tissue from his arm. So, understand, he was in really, really bad shape.”

Since then, he had several painful skin grafts and had joined the band onstage for his last show at The Big Four show at Coachella whilst continuing his rehabilitation. Unfortunately his liver gave up on him.

This is extremely sad news. RIP. Our thoughts go out to all family and friends. Long live Slayer. We hope that this allows the band members to pull together and work together following what has been a difficult year for them all. Skate to Slayer all weekend for Jeff.