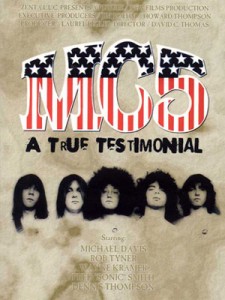 It’s now been over 8 years since the last authorized screening of the MC5 – A True Testimonial documentary at the Detroit Film Theatre on October 30, 2003.

In that time, all the alleged ‘copyright infringement’ claims made against David Thomas, Laurel Legler and Future/Now Films have been thoroughly litigated, found to be without merit and the film has reportedly been cleared for released, once the various music licenses are secured.

This is hard to find on bootleg but if it was released on DVD would you buy it? If so then click here and weigh in your thoughts in this simple poll and read our review here.