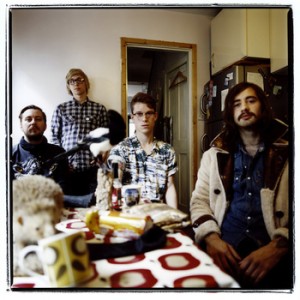 You may remember this band playing a killer live set at our Camden Crawl date last year at the Barfly. They have been writing new material which is about to see the light of day and from what we have heard, it’s fantastic.

This week, the Holy State released an amazing, new video for track Dial M For Monolith which sees the 4-piece tackle outer space on a budget, but pulling it off remarkably on the effort front.

The track is described as a “story of evolution through space and time, taking us from the dawn of humanity to to beyond the infinite” with the video a tribute to Stanley Kubrick’s 2001: A Space Odyssey.

You can check out the video below and get ready for the band’s debut album Electric Picture Palace, which will be released by Brew Records on April 30th.