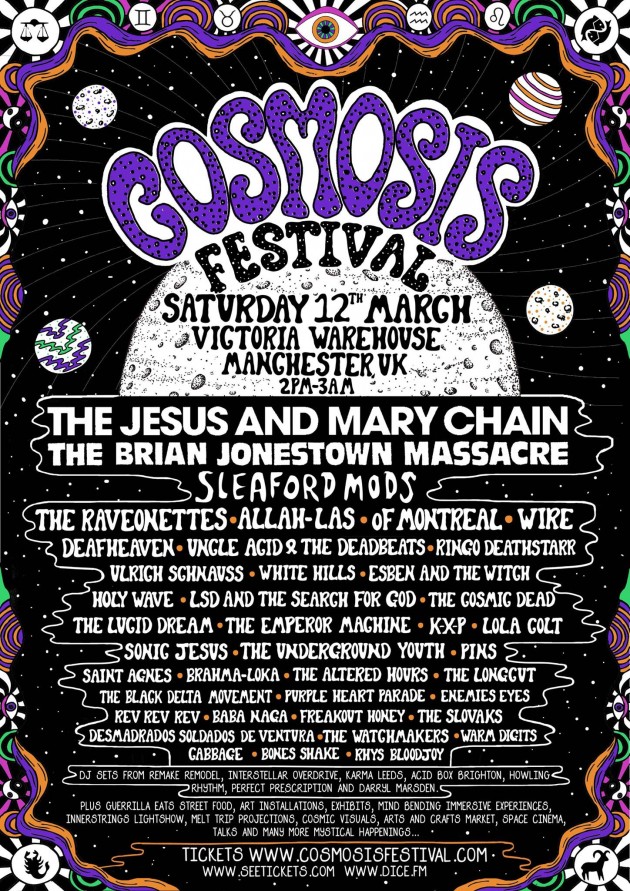 Seldom do I comment on something that is going on outside of Brighton, however, on the odd occasion a real special event comes along that just grabs my attention by the jewels. Cosmosis Festival in Manchester is one of those events. The best part? It’s all to take place in the Victoria Warehouse. Imagine that. Imagine that great big, bloody sound echoing around in there!

Over the years of festival going it’s rare to see such a promising line-up, and one for all psych-heads and lovers of anything with a bit of release out there, it is a must do event. Dig below for the skirting details.

The line-up takes into account one of the greatest and most recognisable cult bands of, well, arguably all time: The Brian Jonestown Massacre. A band that revolves around Anton Newcombe’s wit, wisdom and curiosity – they have produced 14 studio albums and countless EPs detailing their musical ventures, moves and fierce fights against the music industry. From Give It Back! to Revelations, sounds change, each equally as interesting as the other. We really cannot wait to catch this mesmerizing bunch once more.

Running alongside them and headlining the event are Scottish shoegazing giants, The Jesus and Mary Chain. Having produced such seminal albums as Darklands and Psycho Candy, they have influenced the sound of a guitar and what you can do with some frets and six strings beyond your mind’s belief. Expect face melting sounds to leave you blurred and crawling on the floor wondering what happened en-route.

Beyond the two main attractions, the line-up swarms through a field of psychedelia, fuzz and punk. On the colorful, carefree side there is the West Coast haze of The Allah-Las, the eccentricity of Of Montreal and the return of the shoegazing dream: LSD and the Search for God. This acts as the calm before the storm and it’s set to be bloody great.

For the uptight, tense music lovers – you are all just as well catered for. The post-punk angst of Wire revels within Victoria Warehouse. This is generated onwards to the gloom of Esben and The Witch, the dream-pop of The Raveonettes and the stoned psych noise of Uncle Acid. Expect as much fuzz as a 14 year old’s attempt at a beard, swooning guitar lines and ushered vocals.

Beyond the bigger names lurk some fantastic newbies as well – the garage-rock of The Black Delta Movement to the Fugazi-esque The Longcut. Or the desert rock of Lola Colt – sounding something like PJ Harvey lurching into a collision with My Bloody Valentine. In addition, there is the sitar revival of Baba Naga, the relaxed, curious waves of far flung psychedelia sounding like Kula Shaker on some serious sedative. Up and down the festival line-up, it is impossible to pin point every band as the line-up begs for attention on every level. Get stuck into the Spotify playlist below and give the whole thing a run through, even though it’s up in Manchester it is certainly not worth missing. Post-gig DJ sets run where you can catch my local favourites Acid Box Promotions proving their worth too.

It’s not so grim up Norf after all.