Playing as part of the annual ‘Winter Of Discontent’ Festival, which sees the best of the anarcho and snotty punk bands from around the world playing over four days at the legendary Dome venue in Tufnell Park, it’s been ten years since Texan hardcore heroes MDC graced our shores and anticipation is high for their return. For the unitiated, MDC (which at any given time can stand for Millions Of Dead Cops, or Millions Of Damn Christians, or 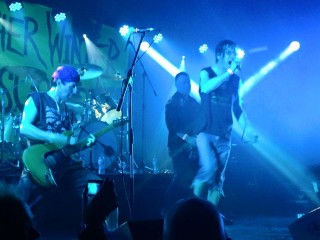 Metal Devil Cokes etc) started out in Texas in the late seventies and quickly became an important part of their flourishing American Hardcore movement that was exploding across the States. Their debut 1982 album is without a doubt one of the most ferocious, explosive, angry, chaotic and fiercely political albums to emerge from that movement. It’s also one of the best. These guys were brave. Just imagine what it must have been like in Texas and touring America in the early eighties in a band called Millions Of Dead Cops! The amount of harassment and grief this band got from the authorities beggars belief. True hardcore.

Their pairing with the Subhumans is perfect. Both bands complement each other. The Subhumans never disappoint. Despite their long existence you could never accuse frontman Dick Lucus and his Buman brothers of calling it in or going through the motions on a cash-in nostalgia trip. Sure, the majority of their set is always drawn from the classic rock of their eighties albums, but songs like ‘Subvert City, ‘Labels’ and ‘No’ are played with such conviction and passion, it’s impossible not to get swept along in their boundless energy. These songs, the lyrics, and the message are timeless, and tonight they are as good as they ever have been, dedicating a stunning version of ‘Fade Away’ to recently departed Conflict drummer Paco to cheers and respect from the crowd. Another epic Subhumans gig. 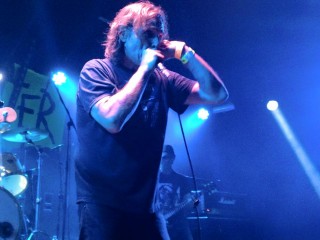 There’s a real buzz of excitement in the air before MDC hit the stage and, despite suffering from a dodgy sound as frontman Dave Dictor (all bass, no guitar) and his band start rampaging through their high-speed anarchist punk anthems, the venue explodes with predictable chaos. As the set goes on the sound starts to improve and Dictor, despite being very ill in recent months, is on fine form, stalking the stage and barking out the lyrics in his distinctive Texan drawl. The set draws heavily from the band’s first album with a few choice cuts from later releases, but the surprise of the night is when they play the classic ‘Multi Death Corporations’ 7” EP, originally released on Crass Records in 1983, in its entirety. The four songs from that EP go off like Molotov Cocktails in Tufnell Park and that moment is as good as it’s possible to get in hardcore punk. MDC are back in the UK this August. Don’t miss them.