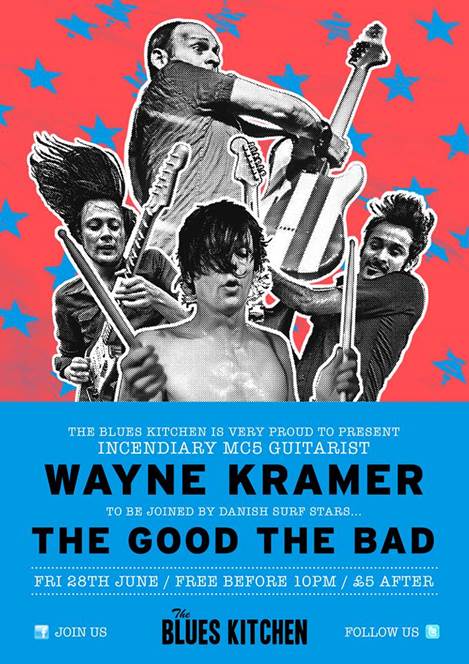 It started at SXSW earlier this year. The legend that is Brother Wayne Kramer, guitarist with the notorious, most righteous, most radical motherfucking rock n’roll group of all time – THE MC5 – was in Texas to play shows with Rage Against The Machine guitarist Tom Morello. Also there to promote his Jail Guitar Doors charity, he happened upon Danish psych-surf mongers The Good The Bad and joined them onstage for an impromptu and incendiary version of ‘Kick Out The Jams’. “Thelonious Monk is alive and well with an electric guitar in The Good The Bad,” stated Wayne. “They’re my idea of a cool band and one of the most original I’ve seen in the last decade.”

Obviously keen to repeat the experience, Kramer was invited to play Glastonbury for the first time at the invitation of Billy Bragg and tonight’s gathering at The Blues Kitchen in Camden is a warm up for that set.

The evening starts with an acoustic set from Kramer. He starts by announcing that tonight is the 20th anniversary of legendary ‘poop rocker’ GG Allin’s death before kicking into a wonderful version of the MC5 classic ‘High School’, which has the whole crowd singing along with the infectious chorus and raising the roof!

Next up, Wayne plays a cover of The Clash B-side track ‘Jail Guitar Doors’ – a song that was written about him by Mick Jones back when Wayne was incarcerated for drug dealing back in the seventies and is now of course also the name of Kramer’s charity. The rousing track works perfectly striped down to acoustics and once again, the motley collection of old punks and rockers sing along to every word.

Danish surf punks The Good The Bad are up next and crash through a short set of high-octane instrumental rock that keeps the energy levels high as guitars blast back and forth but it’s when Wayne takes the stage that proceedings really kick up a gear – leading the band through a spine-tingling version of the first MC5 single ‘Looking At You’ and ending with the band’s call to arms ‘Kick Out The Jams’. If there’s a better, more life-affirming song than this in rock n’roll I’m yet to hear it. When the song explodes into life, it damn near takes the roof off. Sure, they can’t resist the temptation to drag the song out a little to long but those first few minutes are rock n’roll perfection. And it’s not every night you can see a genuine rock legend play a pub in Camden.