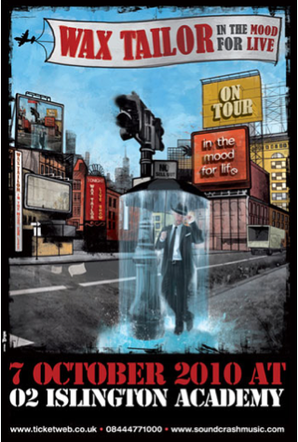 Having already brought his Gallic flair to Koko earlier this year as well as playing Glastonbury Festival, Jean-Christophe Le Saoût, the man known to most as Wax Tailor returned to the UK with a host of his friends to bring the party to North London on a grey and otherwise drab night.

Taking to the stage with a cellist, violinist and flautist and backed with a cityscape complete with three screens displaying moving animation, videos and other visual treats, the chapeau’d producer and DJ got proceedings underway with the bumping No Pity before introducing his long-time collaborator Charlotte Savary; who looked every inch the unassuming yet totally in control Amelie figure the fans have come to know and love for Dragon Chasers.

Whilst always showing his dexterity on the turntables, Tailor made sure that it was a show that was being viewed, rather than just a showcase of his own talents. With MC Mattic joining the fray, beanie pulled down over one eye and playful sneer on his face, the energy levels were ramped up that extra notch as hands pumped the air and feet got to stamping. The two worlds collided on the track Fireflies with a hypnotic backdrop mesmerising the crowd before the two MCs of ASM hit the stage for Say Yes, much to the delight of everyone in attendance.

The set, which lasted an hour and half, continued to enthrall, with Tailor taking centre stage for a medley of tracks and letting his live band do their thing, always imploring the crowd to give them the applause they deserved whilst calling for more call and response. The crowd interaction raised to fever pitch when Tailor asked for a singalong to Que Sera, a track which even the most hardened of football fans are happy to ring out loudly.

As the night ended, all the MCs and singers returned to the stage, each giving their own take on the hip hop beats and ended with a mass theatrical bow. The cheers and yelling that sounded out were very much deserved and showed Wax Tailor that he’d be welcomed back to the city anytime.