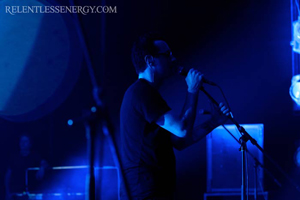 with The Heritage Orchestra
Premiere of Relentless Documentary ‘Lives of the Artists: Follow Me Down’
Union Chapel, 07.09.10

UNKLE fans were treated to an intimate and rare performance at London’s Union Chapel to celebrate the launch of the new Relentless Energy documentary ‘Lives Of The Artists: Follow Me Down’.

Accompanied with The Heritage Orchestra, James Lavelle was joined by his current UNKLE live collective Leila Moss (The Duke Spirit) Gavin Clark (Clayhill) and Joel Cadbury (South) who combined, delivered a powerful, intense and moving set following the premiere of the screening.

The soundtrack to the film was written exclusively by UNKLE and also features a new track named ‘Set No Sun’.

Filmed last year, ‘Lives Of The Artists – Follow Me Down’ sees the documentary explore a music artist’s journey (James Lavelle) in tandem with legendary backcountry snowboarders (Jeremy Jones and Xavier De La Rue), delving deep into their psyche and inner workings. Giving an insight into what drives them as individuals, the documentary spans from the infancy of their respective disciplines, to pioneering new routes and overcoming adversity. The story is a compelling one….

For James Lavelle we travel back to the conception of Mo’Wax ,the first incision of UNKLE and its fluid evolution though out its 20 year history , still striving to break boundaries which is still very much core to the collectives spirit.

We also see free-riders Jeremy Jones and Xavier De La Rue brave the slopes of the Antarctica – the first time to be attempted by any snowboarder- climbing steep faces unlike any other terrain both had experienced before. A life-long ambition for both adrenalin junkies, their story is both exhilarating and awe inspiring.

During the performance Lavelle dedicated a recent track ‘The Healing’ to the wife of one of the original founders of the UNKLE who had just passed was away whilst the documentary was being screened.

“I just want to dedicate this track to the wife of somebody who worked on this film. She died tonight. It was strange watching the documentary and getting a phone call about that.”

The set also saw the band performing a range of tracks across their back catalogue including ‘Lonely Souls’, ‘Reign’ (with Gavin Clark stepping in for Richard Ashcroft & Ian Brown on vocal duties) and material from ‘End Titles… Stories for Film‘.

‘Lives of the Artists: Follow me Down‘ is available to view on the Relentless site and as an added bonus, you can download a free remix of the ‘Set No Sun’ track here. Go grab it.