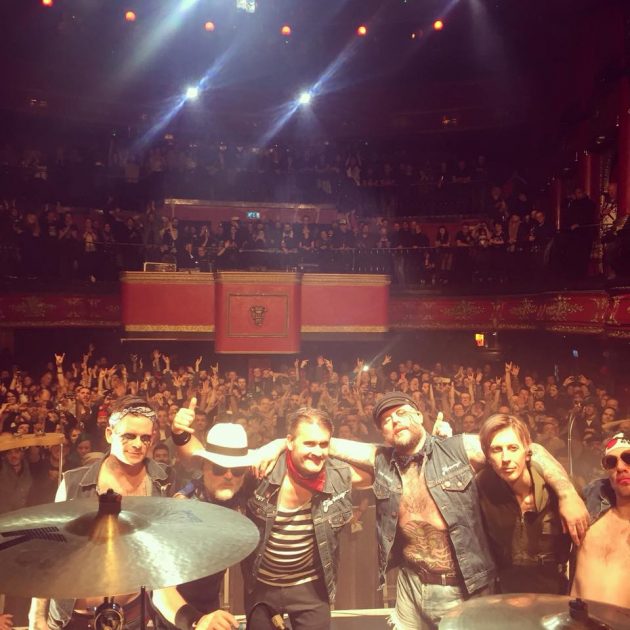 The announcement of an all-too-rare Turbonegro UK show was a cause for celebration round Crossfire’s way, but as we make our way to a sold-out Koko tonight, there’s an undercurrent of doubt in our minds. Firstly, how many of the Turbojugend faithful will actually show up, given the snow that has paralysed so much of the UK’s public transport? Secondly, we’re not sure what to make of the Norwegian crew’s new album ‘Rock N’ Roll Machine’; whilst it’s great that the band have welcomed a new keyboard player into their ranks (that’s Crown Prince Haakon-Marius to you), his Van Halen-esque synth wizardry has arguably pulled the band away from the down n’ dirty deathpunk sound of their glory days.

We needn’t have worried too much, though, as by the time openers Easy have warmed us up, most of Koko is a sea of dark blue denim, with many a sailor hat floating on top. And although the band themselves have to kick off painfully early (around 8), they rip into ‘Well Hello’ with such panache, you’d defy even the most casual of Turbonegro fans not to feel a sudden and potent jolt of adrenaline. We’re soon pleased to discover that several of those newer cuts grow sharper teeth when played live, and indeed you’d think that the likes of ‘Hurry Up And Die’ and previous single ‘Hot For Nietzsche’ had been around for years, with an increasingly sweaty crowd roaring back every word at vocalist Tony ‘The Duke Of Nothing’ Sylvester.

Ah yes, of course, Mr Sylvester – a man who surely has to take a huge chunk of credit for getting Turbonegro sounding leaner, harder and hungrier than they had in a decade on 2012’s fantastic ‘Sexual Harassment’ (completely ignored tonight, alas), and a true showman to boot. Whether dispensing humorous anecdotes, arranging a ‘wall of deathpunk’ or leading us through a turbo-charged rendition of ‘Get It On’, there is never a dull moment with this guy, and he more than deserves the hometown hero’s welcome he gets tonight.

So yeah, we’re pretty much convinced by now, but Turbonegro are not the kind of band to leave things to chance, and a triple-threat encore airing of old favourites ‘The Age Of Pamparius’, ‘Self-Destructo Bust’ and – of course! – ‘I Got Erection’ leaves us on the ropes and gagging for more. They’ve always been (and probably always will be) a cult concern, but with shows like these, our love for Turbonegro will only grow larger – and harder. Come back soon, guys.