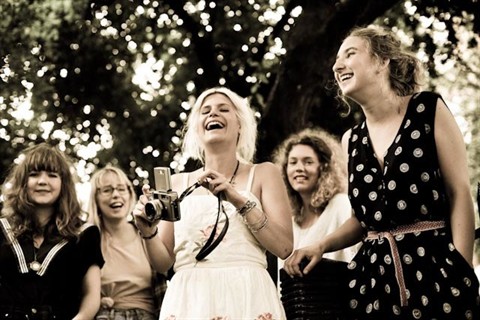 When they first visited these shores three-odd years ago, a couple of Those Dancing Days’ members were technically still schoolgirls, fresh out of the classroom onto the tourbus. Even at this tender age, though, the Swedes’ ear for a great tune was evident, and it continues to serve them well today. The focus of the increasingly fickle music blogs may have moved on to pastures new, but the almost sold-out XOYO is testament to the band’s loyal UK following.

A trio of smartly-suited guys kick things off with a bizarre, Pulp Fiction-esque surf guitar work out, before Twiggy enters and joins them on vocals. Okay, it’s not actually Twiggy, it’s Lizzie (and her band The Yes Men), but the resemblance is striking. Their angular indie/punk sound is hardly breaking new ground, but the harmonies and surf riffs are strangely addictive, and the applause from those present is well-deserved.

Those Dancing Days vocalist Linnea Jonsson and keyboard player Lisa Pyk are perhaps the yin and yang of the band; the former a picture of glacial cool, the latter a picture of wide-eyed enthusiasm who can barely stop smiling or dancing long enough to play her instrument. The band’s recent second album ‘Daydreams And Nightmares’ has a certain rougher edge to it than its predecessor, but in the live setting, the new songs fit in just fine. ‘I’ll Be Yours’ and new single ‘Can’t Find Entrance’ already seem to be crowd favourites, whilst ‘Hitten’ is still a beautifully understated ode to the confusions of growing up.

In a manner that would have made the Ramones proud, they barely pause for breath between songs – drummer Cissi’s arms an almost constant blur as they rattle joyously through ‘Home Sweet Home’ – and frankly it’s just what we need on a fairly nondescript Wednesday evening. They encore with the spiky ‘Fuckarias’ and the swirling melody of their eponymous debut single, ensuring everyone leaves happy with their shot of indie-pop vitality. Where TDD will go for album number three remains to be seen, but so far it’s been thrilling to watch (and, more importantly, hear) them grow.