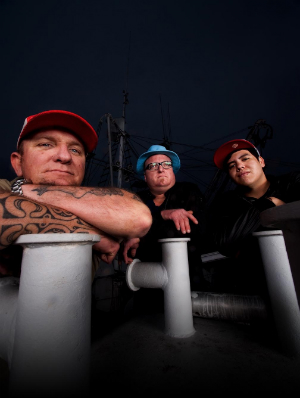 Sublime in its original form never made it to the UK apparently. In fact, there are many of the band’s songs that were never performed in a live setting before original frontman Bradley Nowell died. And so original members Bud Gaugh and Eric Wilson have reunited with new talent Rome Ramirez (he’s a mere 21 years old) and are performing under the moniker Sublime With Rome. Shepherds Bush Empire is packed to the rafters tonight and it’s a sweaty beer-spilling affair with a chorus of voices constantly on hand to help Rome out with classic tracks such as ‘Date Rape’, ‘What I Got’ and ‘Ball And Chain’. His voice is uncannily similar to Nowell’s and the crowd welcomes him with glee as the band rattle off hit after hit.

In a set that comes close to two hours long, Eric, Bud and Rome have the audience rapt and everyone present is in such a good mood that you can’t deny this will be one of the highlights of the musical year for many of them. When the band leave the stage before performing the legendary ‘Santeria’, uproar ensues and it feels like the venue is going to collapse under the weight of severe stomping and urgings that the band should return to the stage. And return they do. A trio of tracks landing finally on everyone’s beloved ‘Santeria’ rounds off a night that will never be forgotten by anyone who was present to witness it. Currently working on a new album, Sublime With Rome are a force to be reckoned with.