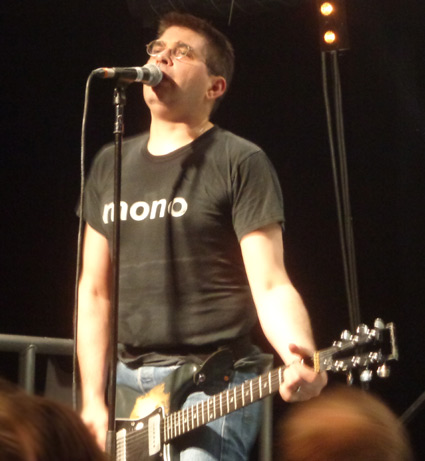 Within my group of friends and bands that I played in around the mid-nineties, Shellac were incredibly influential. When I listen back to music we made then, you can clearly hear the shift in sound and style that they brought with them with that first batch of incredible singles and the ‘At Action Park’ album. A lot of it was down to the hugely original drumming style of Todd Trainer. He introduced a whole new minimalist, yet immensely powerful, choppy drum style that I am still trying to rip off to this day! That combined with Bob Weston’s grinding bass and Albini’s sheet metal guitar created one of the most distinctive, original sounds to emerge from the 90s US underground.

It’s hard to believe that twenty years have passed since Shellac first made their presence felt. Insane as it may seem, but for followers of Big Black and Rapeman, Shellac still feels like Steve Albini’s new band! However, the fact of the matter is they’ve been doing this a long time now but what is immediately striking, as the band take to the stage bathed in suitably minimalist white light, is how fresh they still sound. The fact is Shellac are far from prolific. In twenty years they have produced just four proper albums (a fifth is due in 2014) and their tours and live shows are few and far between so when they do get to play, in their own sardonic way, they look like they really enjoy it. When they open tonight’s set with ‘A Minute’ from their classic debut album ‘At Action Park’ it sounds just as brittle, spiky and dynamic as it did when it first burst out of our speakers all of those years ago. Taunt and tight, the Weston and Trainer rhythm section is hard to beat. Todd is a genius behind the skins. His rolls, his fills, the way he strikes the skins, his weird face, his posture. It’s hard to take your eyes off him. Well, at least it would be if Albini wasn’t to his left, slashing out razor guitar noise, his guitar strapped around his waist (how does he keep it strapped on like that?), howling into the microphone. He is equally mesmerising.

I’ve seen many Shellac gigs over the years and this is certainly up there with one of the best. The sound is clear and sharp (but could be louder) and they play every song you could ever want to hear, even ‘Copper Song’ – one of my personal favourites. ‘Wingwalker’ is particularly ferocious tonight, with a spectacular spoken ramble from Albini (“I haven’t got a house, but I have got a plane…motherfucker,”) and for an hour and half, they play everything any Shellac fan could want to hear, and more. Let’s hope that next year finally brings the new Shellac album we’ve all been waiting for and they grace our shores once more.