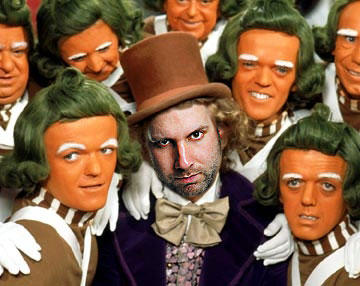 When Sage Francis recently announced that his current tours would be his last, the backpack rap fan in me shed a tear. Whilst I’ve not been the biggest fan of the last couple of Sage albums, he’s always been one of the heavyweights of the independent rap world and his Sick Of… mixtapes, his Personal Journals album and the Non Prophets record he made with Joey Beats are still brilliant, years down the line. Having seen Sage a few times before, it was always going to be an entertaining send-off and he absolutely didn’t disappoint.

Arriving on-stage and tying his Strange Famous flag around his neck like a cape, he pressed play on his CDJ [and why does Sage need a DJ anyway?] and the party started. Tracks from his A Healthy Distrust album sounded huge on the Scala’s speakers [sounding arguably better than I’ve ever heard at that venue] with Sea Lion and Escape Artist kicking things off and immediately getting the crowd singing along, hanging on the MC’s every word. He dropped the original and previously unheard beat for Slow Man from his latest opus Li[f]e and then warmed my heart with Climb Trees, which garnered a resounding “if these walls could talk they wouldn’t shut the fuck up” and Broken Wings, complete with Sage’s miming to the original that he sampled.

Even though he’s a one-man show, without even any backdrop behind him, Francis has no problem in entertaining a sold out venue. During the upbeat drums of Dance Monkey, he provided the crowd with his own little dance routine and, though I’ve seen him perform a similar feat before, it is no less fun this time around. Little asides such as his line “Dubstep didn’t kill Johnny” and turning one of his tunes in Pokerface by Lady Gaga seem to fill him with as much joy as they do his fans and that’s the secret to the vibe tonight – just enjoy yourself.

Not letting up once, he ran through some major bangers – The Ain’t Right, The Cure [accapella] and Damage [during the encore, ably assisted by B. Dolan] from the Non Prophets Hope album, Gunz Yo and his brilliant Makeshift Patriot following his airing of America, Fuck Yeah, were grin-inducing. Even his Yann Tiersen produced The Best Of Days, which isn’t remotely bouncy, had the entire floor jumping up and down and crying out for more even when the encore was done.

If this is indeed the last time Sage ever plays London, then he’ll have done so in the perfect way. Old and new, happy and sad, the set list was brilliant.