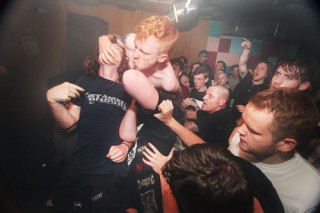 Little has changed since Nails last played in the UK. Still the same four men on stage, the same songs and as heavy as ever. Since their November UK tour the band have signed to Metal Blade Records, former home to genuine metal legends Trouble and Slayer. With that in mind, its needless to say that this show sold out far in advance and the room is heaving.

Despite a very clear metal influence, Nails are undoubtedly a hardcore band meaning the crowd is a mix of Minor Threat and Obituary shirts. Similarly, their support act, Inherit, take influence from both thrash metal and hardcore to create a noise that could be easily compared to Leeway or Cro Mags.

Drawing from past encounters with Inherit, they’ve often left me a little cold. I feel they tend to play for a little too long, and with only eight songs released, setlists are often similar. For whatever reason, tonight feels more like the first times I saw them, an exciting band with excellent crossover riffs. Opening with an intro that sounds so much like Slayer you’d assume it was taken off of Hell Awaits, and the crowd are right behind them. Frontman Adam Malik discusses with passion the similarities between hardcore and metal, singing Nails’ praises for playing tiny backroom shows despite being able to fill rooms twice this size. Ending on a cover of Zero Tolerance’s ‘A Minute to Pray’ is something I’ve seen Inherit do for years, and as ever, it gets people moving, despite their unfamiliarity with a metal audience. 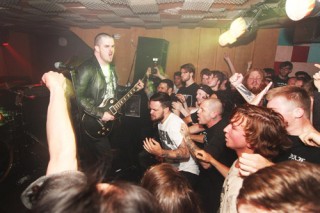 After a short changeover, its time for California’s Nails. With this London show being the only UK date of their European tour, the excitement is high. It takes about three seconds of the intro before the crowd start destroying each other, and this rightly continues as the band rip through their desperately heavy back catalogue.

When vocalist Todd Jones was in Terror he had a bit of a reputation for being a fairly negative individual. However, between songs tonight he jokes with the crowd, pays tribute to the UK hardcore scene, and seems genuinely grateful to perform to a sold out venue. 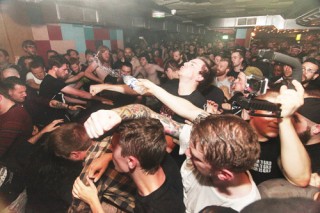 Its perhaps predictable to say that the tracks from last year’s breakthrough record, Abandon All Life, create the most carnage. However when genuinely monsterous songs such as ‘Wide Open Wound’ encourage as much mayhem as can be seen, its hardly any surprise. Ending on a cover of Breakdown’s classic ‘Sick People’ -with Inherit’s Adam Malik on vocals- may seem like an unusual closer, but for those who know it they’re in paradise, with stage pile ons and mass stage diving taking place. Todd Jones ends on the promise of returning to the UK next year to host a release show for their next full length here in London, and as the band leave the stage, its clear that the love the UK has for Nails is mutual.