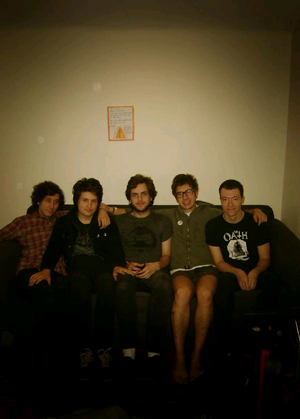 Coming to the UK for the first time can be a daunting experience for international bands. Although undoubtedly exciting, playing foreign cities to a room full of strangers has the ability to deflate or add gusto to a band’s performance. In Touché Amoré’s case, their cause is strengthened by a stellar selection of support bands, and a loyal fanbase garnered off the back of their exceptional 2009 LP ”…To The Beat of a Dead Horse”.

Warming up the crowd are Throats, playing yet another London show in support of a debut album of their own. As the band struggle to fit all of their equipment on stage prior to playing, it seems inevitable that they are struck by technical problems midway through their set. Although this makes for a slightly stumbling performance, as ever Throats are hugely impressive when in full flow. Up next are German hardcore outfit Lighthouse, who had partnered Touché Amoré on the rest of the European tour. Having no prior knowledge of the band I wasn’t sure what to expect, yet come away completely won over by their lively performance.

This leaves Touche Amore to round off the night with a show stealing headline performance. The band are met with a hero’s welcome, as they play the bulk of songs from “…TTBOADH”, both contributions to their split with La Dispute, and even a new song from their forthcoming album on Death Wish. Highlights come when the instruments are broken off, leaving the audience to shout the band’s lyrics back at them in moments of pure euphoria. A great example of this comes in the bridge section of ‘Cadence’, which sees TA’s singer jump down into the baying crowd. Set closer ‘Honest Sleep’ is another of the best moments, bringing the night to a close with the triumphant chant of the song’s final refrain. As the band leave the stage promising to return next year, Touché Amoré have marked themselves out as the hardcore band to watch in 2011.