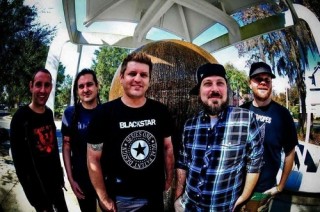 “You’ve been coming to see us for 15 years?” barks Less Than Jake singer/guitarist Chris Demakes to someone down the front, shortly before trombonist Buddy Schaub scales a stage-side wall to parp out the intro to a supremely groovesome ‘Nervous In The Alley’. “Well, whose fault is that – mine or yours? Don’t pin that one on me!”

Guys, it’s always a pleasure to have you back. Around the turn of the century, Less Than Jake’s smart ska/punk tunes and colourful, hi-octane gigs were a welcome antidote to the dourness of nu-metal, and after all these years (and some great records to boot), their appeal remains much the same. Tonight is their first ever show in Kingston, and although LTJ certainly have the songs and stage presence for a Big Rock Show™, this feels more like an oversized gathering of friends to rock out, bounce around and generally have a blast.

So that’s exactly what happens, and frankly, it’s hard to tell whether the band or crowd are enjoying themselves more. Predictably, classic cuts like ‘Johnny Quest Thinks We’re Sellouts’ and ‘All My Best Friends Are Metalheads’ dominate the set (the latter inciting utter pandemonium in the crowd), but a supercharged run through recent gem ‘Good Enough’ indicates a band with their foot still firmly on the gas. What more could you want? Some large balloons? Some toilet paper guns and a confetti cannon? The crowd bouncing halfway to the ceiling during an anthemic ‘History Of A Boring Town’? All joyfully present and correct.

Like all the best shows, tonight seems to pass far too quickly, although it ends in fine style as an increasingly sweat-drenched crowd almost drown out Chris and co-vocalist Roger on ‘Gainesville Rock City’. Less Than Jake might not be able to pack out the likes of the Brixton Academy like they did about a decade ago, but when they’re on such great form, you can’t help but feel sorry for the folks who didn’t want to stick around for a party that was – and is – far from over.