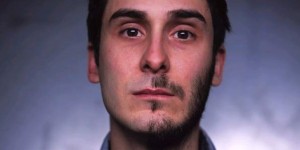 Joan of Arc appear on stage looking exhausted. Their supposed 7 hour flight from Chicago was a disaster, turned into a 16 hour travel nightmare that left all of their luggage and equipment stranded in Atlanta. “I haven’t slept in 36 hours,” groans Tim Kinsella, founder and only constant member of the band, after only the first song of the night.

The conditions are far from ideal, but having been staples of Chicago’s prodigious alt. Rock scene for the past two decades, the members of Joan of Arc are more than equipped to deal with such setbacks. Borrowing the instruments and backline from Hot Club De Paris, the band are in surprisingly good spirits, as though the trauma of the day has been taken into their stride, incorporated by Kinsella’s awkward, irreverent crowd interaction. While this show might be rough around the edges, this almost suits Joan of Arc, a band who by their very nature avoid sounding clean and precise.

Beginning with a trio of songs from recent album, Life Like, fans are kept happy by what is easily some of the best work of their career. It’s difficult to objectively explain what’s so great about Joan of Arc; there are virtually no hooks, they often sound off key and their time signatures are all over the place, yet their unique take on melodic 90s emo is engaging and almost entirely of its own. The band tune up frequently between songs while Kinsella improvises with some tired attempt at banter, but the room is forgiving and full of love for this cult band.

The real highlight of the night is saved for the final stretch, though, as the band look to the past with covers of Kinsella’s previous band Owls. Running through both What Whorse You Wrote Id On and Anyone Can Have a Good Time, the mood is transformed from appreciative to a mass sing-along from one of this reviewer’s favourite records of all time. Having never seen Tim or Mike Kinsella perform in any of their many capacities, it’s an absolute joy to witness Joan of Arc celebrating different aspects of their legacy. Now, surely it’s about time we saw that Cap’n Jazz re-union come over to the UK…