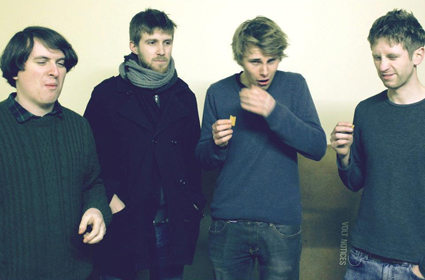 There are hundreds of adjectives that spring to mind as Ireland’s Girl Band clatter through their first track of the evening. The one I’ll start with is ‘unassuming’. For a band who look so pleasant, they make a particularly ugly brand of post-punk – all chainsaw guitars, throbbing bass and extraordinarily unusual structures. Ugly their sound may be, but it’s also touches on sheer brilliance.

Mixing longing drones with blisteringly raw and fast tracks, the energy never relents despite their chaotic unpredictability. For a band with such little melody, they manage on several occasions to get the packed out audience moving – such is a testament to the thought that has gone into crafting each of their tracks. Each track seems to have just about the right amount of each ingredient – even shoehorning in some quiet moments to allow the each nuance to breathe.

Repetition is a key tool in Girl Band’s repertoire. Many of their songs take an idea and let it naturally unfold and reveal itself, until you’re faced with cacophonous wall of jarring discordance. As the tracks move and swell, frontman Dara Kiely’s lazy monotone erupts into a pained howl, mirroring the rest of the bands erratic chaos. Given more time, audiences will be screaming the lyrics right back at him.

The bands cover of Blawan’s ‘Why They Hide Their Bodies Under My Garage’ is a definite highlight, taking the throbbing techno of the original and skewing it with dark industrial stabs, while recent single ‘Lawman’ gives their set a true feeling that venues this small will soon be out of the question for Girl Band.