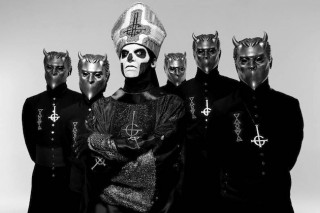 We here at Crossfire love Ghost, we do. (The Nameless Ghoul who plays bass is our favourite, he’s so much sexier than the others). Clearly, we are not alone, as tonight the queue for the sold-out Koko has to double back on itself long before the doors actually open. The Swedish sextet’s mix of old-school metal, synthesized orchestration and gothic/horror imagery may seem very much at odds with the prevailing Sounds Of 2015, but it makes for a devilishly good night out, and a fine last chance to dance as the year draws to a close.

Dead Soul are armed with some decent melodic industrial rock tunes, but the trio’s minimalist set-up and relative lack of stage presence ultimately draw little more than polite applause from a crowd eager for quite the opposite. They’d probably be more fun in front of their own crowd in a more intimate club.

Ghost, on the other hand, seem completely at home amidst the Koko’s cavernous red-and-gold furnishings. Churches may be heaving at this time of year, but it’s doubtful that many boast as magnetic a figure as Papa Emeritus III to lead their congregations. His increasingly camp between-song banter runs somewhat contrary to his band’s image – with various Nameless Ghoul musicians stalking the stage in black clothes and silver masks – but who says alleged devotees of The Horned One can’t have a sense of humour?

If you’re still tempted to dismiss Ghost as a novelty act, then you really need to wrap your ears around new album ‘Meliora’, which dominates tonight’s set, and on which Ghost have never sounded better. ‘Spirit’ is as atmospheric an opener as you could hope for, whilst the slower ‘He Is’ is sung back religiously by a crowd that encompasses teenagers in Black Veil Brides shirts, a few geezers in 1980s Monsters Of Rock t-shirts, and all folks in between. Quite simply, the likes of ‘From The Pinnacle To The Pit’ and ‘Mummy Dust’ sound bigger, stronger and more memorable than past efforts, whilst still being unmistakably the work of Ghost.

By the time they treat us to an encore of sorts, Papa has long since discarded his papal hat and robes for a tuxedo, and the almost reverential vibe has somehow seamlessly evolved into one of fun and celebration. He compares his band’s traditional set-closer ‘Monstrance Clock’ to an orgasm, and indeed, tonight it proves a deeply satisfying end to a sweaty evening, with many a shit-eating grin amongst the hordes filing out of the Koko. Ghost – come again?