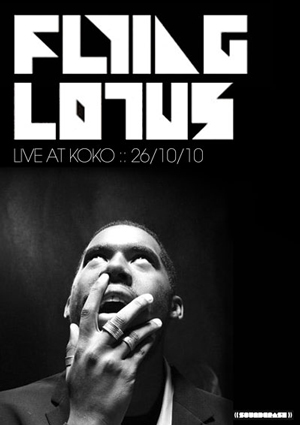 The last time I saw Flying Lotus, it felt similar to a cold winter morning when your car doesn’t properly start, so you turn on the ignition, sit for a while and wait for it to heat up. The difference being that even though you may have a clapped out Fiesta which is closer to the scrap heap than tarmac, FlyLo working full throttle is the equivalent to the A-Team van careering around Woodstock; far out.

Ironically for someone who valiantly eschews any notion of predictability during his live productions, this similar scenario happened at Koko; with an introductory blitzkrieg of off-kilter drums and keys acting as the pre-cursor before Zodiac Shit’s breezy strings seeped through the musical melee. It certainly sounded huge, owing a lot to the Harman Pro sound system, which must be a recent fixture as a few years ago it would have sounded swampy.

Nose Art had an almost teasing build up before the fuzzy bassline rippled through the crowd and shook Koko’s creaking foundations. And a delightful refix of Roberta Flack brought smiles and head nods aplenty. But it’s always best to treat a FlyLo show not as a chance to hear your favourite song live, rather as a performance of cunning ingenuity.

Visually the man is a conductor, musician, and in many respects a comedian, performing with an almost playful and visceral approach to his live work. Sounds and effects appear like it’s a jam session, and it was unclear as to whether the accompanying percussion and keys provided by Richard Spaven and Dorian Concept respectively were entirely incidental, or just an excuse to create whatever rhythms and melodies they wanted to.

Hats off to the fellow, he knows how to put on a show. Even his shadow looked awesome, and who looks at shadows?