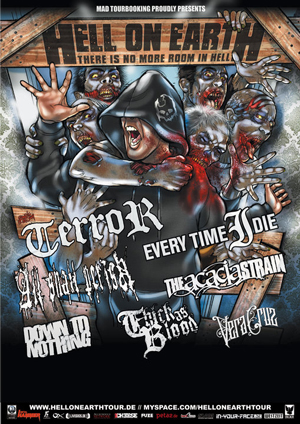 The Hell on Earth tour hit the capital this weekend, with the line-up of Thick As Blood, Down To Nothing, All Shall Perish, Terror and Every Time I Die lining up at the Islington Academy for a whole day’s worth of hardcore. Arriving as late as I did, I only caught the last couple of songs of Terror’s set which were as standardly macho and foot stamp-inducing as you’d expect from the band, which went down well with the hoards of steaming, sweaty fans in attendance.

But it was always going to be about the headliners and as soon as the Buffalo natives jumped on stage, there was no doubt who the party stealers were going to be. Every Time I Die are always fun and you can guarantee that their groove-laden riffs will bring smiles to the most miserable of crowds and Saturday’s showing did just that within seconds of the first track. Sporting a bushier-than-usual beard, Keith Buckley throw himself into the opening tracks with brother Jordan diving into the crowd in only the second song.

Rolling through both old and new material as well as a Nirvana cover, the band mixed in heavier favourites like Floater, I Been Gone A Long Time and Ebolarama which saw the already heaving crowd ramp up their energy that extra notch and tracks such as The New Black and We’rewolf were proof that this band are the most fun you can have with a guitar. Always good bantering with the crowd, Buckley told those watching that a certain word just wasn’t used in America, but that it meant almost nothing over here, before throwing down Bored Stiff, with the infamous “Hey girls, I’m a cunt” line.

When it came to the finale – the aforementioned We’rewolf – nigh-on 40 fans swarmed the stage for a sing-a-long before the huffy sound woman decided too much fun was being had and cut the sound. The sight of that many people in amongst the band [one girl even tapped Andy on the shoulder for a photo mid-song] with smiles on their faces just went to show what a great gig it was. A band as good as this just looking to party is what everyone wants. Thank fuck they love London so much eh?

Sadly there’s no clips from the London show online yet, but enjoy this pretty spectacular performance of We’rewolf at Antwerp the following day…