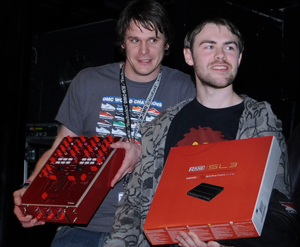 Now in its 26th year, the DMCs has continued to expose the hottest, most talented DJs on the planet. This year the venue is Koko in Camden and the place is packed with critical eyes and party people alike, all looking to be blown away by new sounds.

Split in to two nights, the first night kicks off with the Battle for World Supremacy; and for the third year running the UK’s DJ Switch flexed his super confident swagger to take out DJ Pimp and Solo to make a final with France’s champ, DJ Getback. Needless to say, Switch wasn’t in any frame of mind to hand his crown over to a Frenchman; and after Getback showed a lot of flare, Switch is just born to battle and the judges swayed in his favour for his 3rd title.

The live PAs on the night came from Reeps-One and Eklips, two beatboxers battling each other in the same style the DJs had moments before, and the pair of them really stepped up a level and maxed out for the crowd managing to throw out some dubstep sub-bass to keep the place shaking. The other PA was the outgoing world champ, New Yorks DJ Shiftee. I would have preferred to see him competing, but at any level he hasn’t a thing to prove. Regardless he gave a timely reminder of what’s expected from a champion and killed a 20minute set of eclectic hip-hop and breaks. Brazil’s Yarah Bravo, accompanied by Vadim threw down a sassy set with purple hair and insane dress to boot, this pushes the venue in to party mode.

On to the team finals, and this is a hotly contested affair, with the UK, France, USA and Japan all having worthy winners in the last few years. The UK’s Bionic Stylus Crew put a few live tracks together, but didn’t really hit the levels of France’s Trauma Team who probably hit their peak in this competition with a well versed 4 man scratch setup. But it was Kireek from Japan that made the crowd make the most noise, combining technical excellence without boring the crowd. They managed to make the place jump with their slightly less regimented two-man routine which had the air of a freestyled set, mixed with a solid plan and most importantly they had fun doing so. The judges couldn’t fail to award them their 4th title, well deserved too. 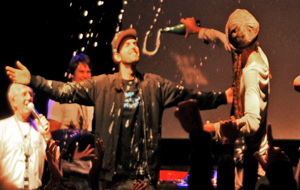 The second night is the main event, the battle for the crown of World’s best DJ. We were treated to a comedy AV set from DJ Woody, as well as one from Shiftee and the inventor of the scratch, Grand Wizard Theodore stepped up to show the crowds where it all started, albeit with a blindfold on for some of his mix! The finals attract more and more each year, riding high in the crowds expectations are the UK’s Jeppa and Japan’s DJ Co-Ma, but the crowd gets right behind Japan’s DJ Blu who drops the most exciting set and has everyone bouncing with a reworking of a Dre beat. When the results come in it’s Frances’s Ligone that takes the title with a very intricate set, standard for French DJs these last few years. Co-Ma got 2nd, but didn’t reach the level of his previous years set, with Blu edged out to third. The crowd were a little shocked that Blu didn’t take this.

The DMCs announced that next year people will be able to use digital programs in their mix, so perhaps the emphasis will go away from tricks to a more varied musical sound. Already the beats have evolved from hiphop, to breaks, to dubstep, so this can only be seen as a positive progression. One thing is for sure, London still loves a superstar DJ, and there are plenty of DJs eager to step up to the plate for next year’s competition – let the qualifiers begin!