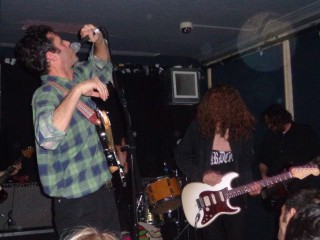 After what feels like forever, Puce Mary unfolds half an hour of noisy gadget ambience. Armed with a staggering collection of synths and effects she undertakes a self-assault, manipulating her own vocal into deep, dark layers of sound. The atmospheric sounds Puce Mary creates recall of the more left field work of Aphex Twin. Bottomless bass drones underneath her distorted, broken speech create a devastating soundtrack. And if one aural assault wasn’t enough, fear not. A gang of the most villainous guitar slingers and freaks of feedback are approaching.

As Destruction Unit take to the stage there’s a call for darkness, ridding the glare that dazzles the stage with a mere flick of the hand recreating the dingy basement atmosphere these guys clearly prefer. There’s no clear beginning to the set tonight, but it would be disgustingly crass if Destruction Unit did ‘introductions’. Rather than a conventional tune up, an adjusting of feedback occurs. Each member toys with their own frequencies until they’ve merged into the zone before erupting into album opener ‘The World on Drugs’.

From here on in, this set is an all-out psychedelic attack. The songs played tonight from ‘Deep Trip’ morph into one another via extended wah pedal abuse and ear-splitting feedback. Destruction Unit are not just punk as fuck, hard and fast, ferocious noise makers though. Well, they are. But they conduct their noise in a manner that fully entrances you rather than inducing a frenzied rage. ‘Night Loner’ has its moments of both chaos and order, easing into a (relatively) laid back mid-section that rides out for what feels like half an hour. 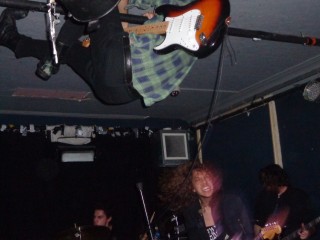 It’s from this point in the set that I really lose clarity of where one song ends and another begins. But this is definitely how Destruction Unit want you to feel. They want to induce that exciting discomfort, disposing of convention; it’s an initiation to the Deep Trip.

When you think it couldn’t get more chaotic the whirlwind of noise builds into a full on psych-out close. The rhythm section hold it down while singer Ryan Rosseau and guitarist Nick lose their shit, scaling the rigging of the Old Blue and balancing atop their amplifiers in search for god knows what, but it’s fucking exciting to watch. During this intensified rhythmic activity I realise how Destruction Unit is the perfect name for this band. The five members work together as a small army, dependent on each other to morph into the next cue and ready for whatever impromptu freak-outs occur on stage.

Although Deep, this trip is a short one. Playing for just over half an hour, I feel like I could’ve ridden it out for longer. But one thing’s for sure, this band is driving a big, silver, mind-expanding machine that can only get faster. I can’t wait to watch them play live again.