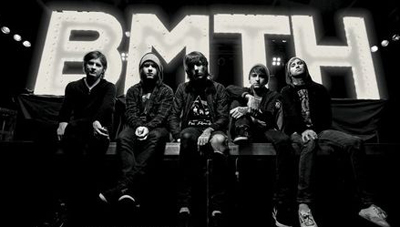 Yep, Bring Me The Horizon at Brixton Academy. How did such a band from Sheffield get to this point? Well, an exponentially expanding fanbase and the stunning of many a cynic and critic by producing two really-quite-outstanding albums (the last two) have really put the band on the map of Great Modern British Rock Bands. An accolade that is recognized pretty much the world over as the band’s success continues to increase in countries like the US and Australia. Add to all of this the fact that the band’s latest single ‘Blessed With a Curse’ has been added to the BBC Radio 1 daytime Playlist and you have all the ingredients for a kick-ass sell-out Brixton Academy performance. Well actually the band have brought even more to the table tonight with an unbelievable stage show which includes pyro, the signature massive flashing BMTH lettering, banners that fall to the ground at strategic points and some massive black balloons which descend and are bounded around by the crowd during ‘Blessed With A Curse’ creating a surprisingly ethereal and peaceful effect.

But aside from the massive production, BMTH put on a flawless performance, running around the stage as energetic as ever, clambering speaker stacks and generally making the audience not quite know where to look. At least everyone can hear the thunderous sounds which are entrancing all present tonight. The band have only just enlisted Architects’ drummer Dan to fill in for BMTH member Matt who has broken his arm yet you really wouldn’t know that they’ve only been playing together for two days. Everything is tightly wound and precise. Guitarist Jonah also proves his worth yet again providing vocals on ‘Fuck’ in place of Josh from You Me At Six who sings on the track on the album. It’s the new tracks from ‘There Is A Hell…’ that stand out in the live setting, sounding absolutely huge.

An encore which includes a spine-tingling rendition of ‘Crucify Me’ and eternal crowd-pleaser ‘Chelsea Smile’ goes down as well as the rest of the band’s set and this evening ends on a high which you get the feeling was needed by a band who have been plagued with misfortune on this run of dates. But the powercut in Bristol the night before that meant the band were forced to play acoustic and the breaking of drummer Matt’s arm a few nights previous don’t matter one bit tonight. It all comes together in spectacular fashion.