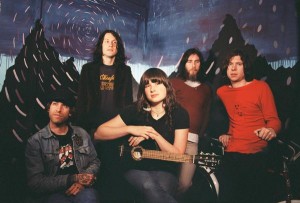 I was more than a tad excited to hear that the upcoming Black Mountain gigs were getting support from trippy Texan psych-heads Black Angels, two bands that absolutely compliment each other perfectly.

Shepherds Bush Empire filled slowly on Thursday night, nothing to do with not selling out in the slightest, more so the thick hazy aroma hanging in the air around the venue, I caught myself wistfully thinking back to better times, staring into the middle-distance like a war vet. A mixed crowd of all ages and styles sauntered their way into the venue, with the hardcore fans setting up camp at the front, ready to sway to the droning tones of Black Angels.

Playing a solid batch of their latest album Phosphene Dream, tracks like Bad Vibrations and Entrance Song are met with metronomic nodding from everyone, although the cleaner sound they’ve adopted since Passover just doesn’t feel as good. Might I add, whoever was lighting director that night needs to chill the fuck out. It wasn’t a rave, so try following the beat of just one instrument, not mash every light with every single musical note and syllable. Seriously, half the audience had to look away as it was too intense.

With the slightly more ‘swinging 60’s’ tracks played, they slipped back to the druggy, Vietnam inspired tracks of Passover, crowd roars and yelps meeting Young Dead Men, it’s ominous intro causing every hair on my neck to stand up, something that hasn’t happened in a long time at a live gig. I’ll say this now, the Black Angels are what The Doors could have been if they weren’t crap. There, I said it.

Black Mountain entered to a chanting intro, moodily let and the excitement rose to new levels for a band that keep getting better and better with every album. Their success is marked with their In The Future album, which topped many a Top 10 list that year, and every track played from it that night whipped the crowd into a shark-pool frenzy of bodies.

Tyrants was probably one of the most epic tracks of the night as Black Mountain drew from all of their influences, from Sabbath to Pink Floyd to Deep Purple and back again. Amber Webber’s voice is even more amazing live, punching through the heavy guitars and humming organ sounds, despite at times looking really lost on stage.

Latest album Wilderness Heart was given a good outing too, with chugging tracks Let Spirits Ride getting the crowd going with it’s balls-out riffs and solos; if you close your eyes tightly you really could be fooled into thinking Iommi and Ozzy and playing for you. Stephen McBean even gave a little prayer to the surf God’s, “Bouncers, be kind to the surfers tonight!”

This night of Black was definitely one to remember, the next day’s ear-ringing gently reminding you that both Black Angels and Black Mountain are making a massive noise right now and look set to continue doing so for some time.