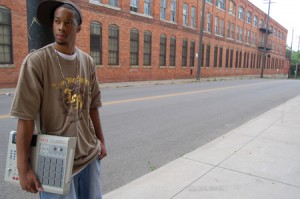 Last time Black Milk played a show in London, he rocked a packed out Cargo, delivering his sharp, snapping drums from his albums Tronic and Popular Demand to a baying crowd who hung on his every word. A hard act to follow no doubt, but the Detroit producer and rapper managed to top it thanks to his live instrumentation, which featured keys and drums as well as a DJ and some tracks from his new opus Album Of The Year.

Appearing from the balcony at Camden’s Jazz Cafe, a venue he recognised as legendary and felt privileged to play, the man otherwise known as Curtis Cross dropped down as Long Story Short smacked out from the speakers and hands were immediately raised in salute before pounding the air in support. The old tracks garnered a lot of cheering from the brilliant Losing Out [sadly without Royce appearing] and Give The Drummer Some which allowed the drummer to showcase his energetic and infectious rhythmic talent.

The new tracks also went down well with Black And Brown, Oh Girl and Distortion whipping up a frenzy, despite the album not having been out long, which only goes to show the talent of the producer and rapper, who performed with a smile on his face throughout. Not to be outdone, AB, his keyboard player, a demure and understated chap, provided some sung hooks with a soft yet extremely powerful voice.

So with the crowd shouting out tracks and vocally showing their support for J Dilla, the show ended with Sound The Alarm to cap off a very enjoyable night for performer and punters alike.