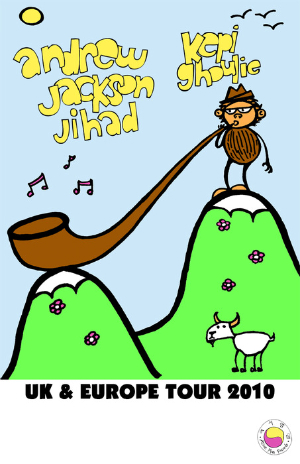 Turns out I wasn’t the only person to yelp when the finest folk-punks of Phoenix, Arizona, the writers of an album that would quickly be in the top 10 lists of at least 75% of the lonely message board readers across the world, Andrew Jackson Jihad announced that they were going to be heading out of the USA on their first ever European tour. Just like when you make an in-joke that someone outside your frequent friendship group finds funny, finding another AJJ fan is one of the best things to happen to an AJJ fan. Unsurprisingly, the gig was a goldmine for this, and yet everyone was still surprised to find another shouting sacriligeous reasons to rejoice even when we were all there specifically to watch them play live in London for the first time. It was obvious watching everyone understandably lose their shit as they start playing, that the wait was worth it. Here were a band that are criminally underrated in their home country and being as impossibly fun live as I expected in mine. I owe them too much for their visit. So it was the least I could do by getting self-destructively drunk and shouting along as loud as I could in an atmosphere so immediately happy, desperate, friendly, escapist, safe and filled with a sort of boozed up camp-song euphoria.

People II: The Reckoning has had a notoriously uplifting sound played live for a long time now thanks to repetitive viewings of the Wayward performance (which you can also see below) on the toobz. Though the crowd weren’t exactly the shoe-gazing sort, a foot-stomping rendition of the track got the entire bar moving and screaming about the rapists and nazis living in all of our tiny, tiny hearts. Later, the awesomely awesome Kepi Ghoulie followed hiw own engrossing set by helping the guys out on Love Will Fuck Us Apart, which if my memory isn’t lying to me (it is prone to doing so) was followed by Sense, Sensability giving everyone the perfect opportunity to link up in hell later on after the show.

Given that the band are a two-piece it’s stunning that their stage presence could match the epicness of a full orchestra and yet maintain a personal connection with the audience stronger than even the best open-mic singer/songwriters could achieve. But then, Sean and Ben fully embody the same not-at-all-serious US punk touring soul of Jeff Rosenstock and could have got an equally warm welcome if they had turned up with iPods instead of instruments. Ultimately, AJJ have made a sound so very unique to them that it has won them not fans, but friends worldwide, who every so often want to hang out at bars and sing along in a state of comfortable desperation about how shitty the outside world is. So yeah, come back soon guys. Please.

The following video wasn’t recorded at the London show but you get the idea. Here’s the aforementioned performance of People II: The Reckoning at Wayward Council, FL.