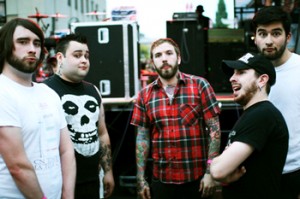 What a bill. Alexisonfire played The Forum at about the same time last year but tonight is different. For one, the venue is ridiculously rammed full of bodies. Later in the evening, it’s a stretch to even see the bar, let alone get to it. It’s also a stellar line-up tonight with the Brits fighting their corner admirably as The Computers and Chickenhawk kick off proceedings with as much energy as their headlining Canadian counterparts. The Computers’ hardcore’d up rock’n’roll clearly intrigues the crowd and they yelp their way through an engaging set before the much hyped (and rightly so) Chickenhawk take to the stage. Rather on the darker side than either of the other bands tonight, the Hawk deluge a storm of dirgey riffs on an unsuspecting crowd. They seem slightly bewildered at the size of the venue but there’s no doubt that their loud sound was meant to fill such venues.

Alexisonfire are veterans of the UK scene by now and boy do we love them. Everyone in the venue’s attention is undivided throughout the band’s lengthy set. The band are on stage for at least an hour and a half and their enthusiasm knows no bounds. Vocalist George makes his way all the way up the steps to the upper level of the venue at one point. And bassist Chris writhes around on the floor like a worm on ecstasy several times throughout the night. A varied setlist sees Alexis traverse their extensive back catalogue, taking in tracks from their self-titled first album right through to latest EP track ‘Dog’s Blood’. And the quality doesn’t waiver. Every song sounds massive as George’s yelps and half-singing intertwine with Dallas Green’s silky smooth melodic vocals.

Such a hearty singalong has rarely been heard as the crowd join in at every opportunity. It also has to be said that Alexisonfire facilitate such group singing moments of brilliance with their fantastic incorporation of as many as ‘Woahs’ as possible into as many of their songs as possible. I’m not sure any other band could get away with making this device sound consistently brilliant. Cropping up in the encore, towards the end of the evening, ‘Accidents’ is the perfect example of this. Kenny from Moneen also pops up during the encore to help with some vocal duties looking like an excitable child. Overall, Alexisonfire put on one of the performances of their lives and everyone present is appreciative to the max.