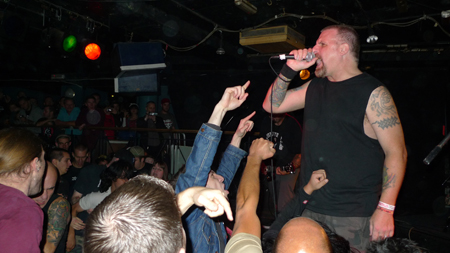 It was all of 30 years ago that 7 Seconds formed one of hardcore’s most influential and highly regarded bands in the American punk scene and tonight they are back at the Underworld in Camden, London for their third visit of our Island. It’s surprising that throughout those years the band never played here, especially as they were huge fans of the UK punk scene and the bands that were throwing up amazing hardcore throughout the 80’s but never the less, they are here tonight in support of Agnostic Front and to be honest with you, it was like time had stood still for all that time.

Opening with ‘Still Believe’ from New Wind it’s evident that the band that formed in Reno all those years ago still have what it takes to deliver a rocking show and Kevin Seconds still has that hunger and desire to bring the best of 7 Seconds illustrious career into the forefront and get a mosh pit going. Within seconds the crowd is alive all singing “use your head, be aware, give a fuck!” from the classic Walk Together Rock Together album and off we go! 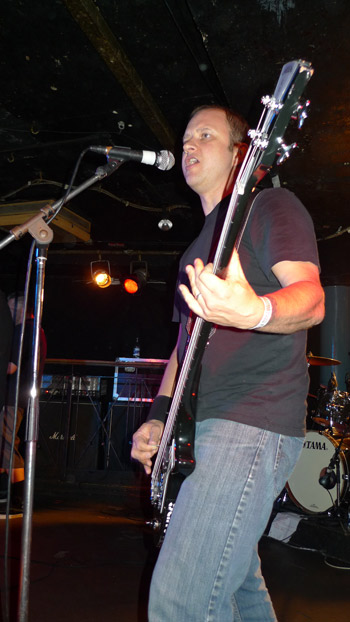 ‘Boy’s Fun’ follows and then ‘This Is The Angry’ – all you can hear are people wailing “whoa whoa!” as the track with the best sing-along chorus from the Scream Real Loud record gets the entire venue singing along to the message and this is what makes 7 Seconds one of the best hardcore bands of all time. This is also exactly what I personally miss from the new breed of so called ‘punks’ of this current generation, a term that has been milked over the years from a bunch of over styled, fashion conscious, energy drink sipping sell-outs who over use the word ‘punk’ in their biogs and fancy web widgets to make them feel part of something. Remember, there was no internet back when these guys were starting out, just phones in houses, record stores (remember those?) and fanzines to connect with the scene and their fans. The sound and scene of the 80’s and 90’s were packed with songs that meant something, songs that were memorable, songs with lyrics you could relate to and with tracks like ‘You Lose’, ‘Young Until I Die’, ‘New Wind’ and ‘We’re Gonna Fight’ hammering the PA at mach 10 the energy that filled this room tonight is one that no ’emo’ band could ever match in today’s so called ‘punk scene’. Oh, it’s SO emotional!

Even ‘One Big Guessing Game’ from Side One Dummy’s Good To Go album sounded great but there was much more to come. As the pit started to feed off the speedy 2 minute spells, stage divers somersaulted onto people’s heads, but the unlucky ones who didn’t get caught still had smiles on their faces as they were dragged up for air. ‘Regress No Way’ had people’s fists in the air followed by ‘The Crew’, ‘Remains to Be Seen’, and then their own version of Sham 69’s ‘If The Kids Are United’ before the absolutely amazing ‘Walk Together, Rock Together’ had everyone in that room sharing the same high; everyone screamed the lyrics out loud to the band’s delight. They were absolutely stoked on this reception and ended their set with the classic cover of Nena’s ’99 Red Balloons’ and ‘Here’s Your Warning’ capping one of the best hardcore shows of the year, in fact so much so that watching Agnostic Front seemed like a stupid idea but before we left, drummer Troy Mowat bowled over to say hello to us with a vuvuzela horn in his hand. Even after smashing out a 40 minute set he still had more energy than most in there, he was like a 10 year old after drinking a can of Coke and bouncing off the walls.

7 Seconds may have been going for over three decades but their desire to keep the hardcore flowing is still just as hungry as ever. Stand up and celebrate these legends when they visit next as they will not let you down.