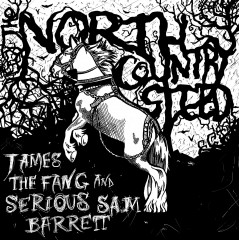 Last summer the UK was treated to a Skate Folk tour consisting of Serious Sam Barrett, the Pine Hill Haints and legendary skate rock pioneer Tim Kerr (of Big Boys fame). The shows that I caught were highlights of a fairly washed out slog of a summer. Skating in the day, then cracking a can and on to the show felt like the dream as it’s meant to be lived. Despite a slimmed down trip this time round – with no Tim and only Jamie from the Haints – the couple of weeks it hit the UK was still a whirlwind blast of skating, boozing and good tunes as their sound was bolstered by various crew members in different cities. The tour was in support of new record The North Country Steed, which sees the two put down 13 songs which pay homage to country, folk and rock n roll with a bite gained from identities forged in punk rock. Love, cowboys, skateboarding, whiskey and jailhouses are all fair game for subject matter and the record draws the listener in from the opening title track, with Jamie alternating vocals and fiddle over a mesmerising guitar lick.

‘RWTB’ is the natural sequel to Sam’s ‘Hennessey Nights’, perfectly encapsulating most given weekends in Leeds, while ‘I’m in so much Trouble’ is vintage rock n roll done acoustic replete with Ramones-esque harmonies. The album also includes ‘Silver Dagger’, released as a free mp3 last year with the Serious Sam Barrett/Pine Hill Haints split, and the first studio recording of ‘Mole in the Ground’, long a part of Sam’s live set and here complimented by some impassioned fiddle playing here. Closing proceedings is a cover of Dubliners’ song ‘The Nightingale’, the two taking on the monumental task of covering Luke Kelly in his prime and coming through with a touching version that does the folk legend justice.

Both these guys have been relentlessly touring, sleeping on floors and putting out music for years now and their mutual shows have already demonstrated how their styles complement each other, but it’s awesome to finally hear that put down in the studio. With the two taking turns at vocal duties over for the most part just a guitar and fiddle, the sound has a sharpness and clearness that isn’t always associated with strictly DIY operations but definitely shines through here.

As I have mentioned the record covers various themes, but at its core it is a dedication to music itself; playing, listening and generally immersing yourself in what you love. Stick it on the turntable, crack a can, make a brew or head out and slappy grind the curb on your back street; it’s bound to fuel the hype.