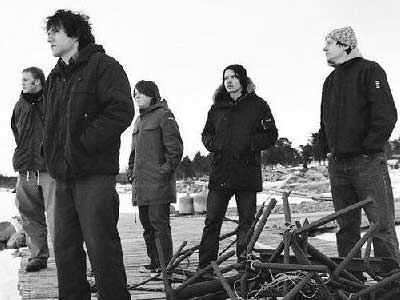 2005 was a frenetic year for the London based post-hardcore supremos Hell is for Heroes. A change of labels, a new album, a live DVD and countless live shows catapulted them back into the public eye – and this year looks to be much the same.

Renowned for the intensity of their live shows, they left EMI midway through recording their second album and signed to the people’s champion of labels – the ever growing Captains of Industry, and are now settling over at Burning Heart and getting ready to head back out onto the open road.

Frontman Justin Schlosberg took some time out to answer a few questions about the last year from Dee Massey regarding the bands future..and most importantly whether he likes pleasure or pain.

Its been a busy few years for the band, The Neon Handshake took the UK by storm and you guys were riding the crest of a huge popularity wave. Can you tell us a little more behind the split with EMI/Chrysalis. The line in Five Kids Go “fuck your well trained golden handshake” seems to suggest you weren’t completely content with being on a major.

The split with EMI was over differences in musical taste. We respect them for not being into our new songs and I think they respected us for not wanting to change them. We were always destined to be a ‘difficult’ band for a major label, not least because we don’t have 6 figure album sales. But we had a good time with them and generally they treated us ok even if they were a bit annoying at times

You signed to Captains of Industry – compared to working with EMI how different it is being on an indie label? What are the good and bad points? And Burning Heart now – how’s that going?

It’s more real I guess. We don’t get picked up by chauffeurs but we do communicate with our label directly and relate to other bands on their roster.

For Transit Disrupt you returned to Tonteknik Studios with Pelle Henricsson and Eskil Lovstrom. How did you recording in a foreign country, and do you feel getting away from London and isolating yourself there was a positive thing for the band?

Pelle and Eskil are our friends and we would have recorded with them anywhere. Just so happens they have a great studio which is a converted mental asylum complete with eerie underground passage ways and clinically white walls. Suited us down to the ground. We also did some recording in a barn in the woods in the middle of nowhere. Sadly we didn’t learn any Swedish apart from the obligatory greetings and swear words.

How much creative control did you have over the album, how involved do you get in the production? How do you feel the sound has grown with the second album? Hopes for the third?

Since we left EMI we have complete creative control. Recording with Pelle and Eskil never feels like ‘the band vs the producers’. its more like they’re our 6th and 7th members – they play on the record and we’re involved in the production. We spent a long time writing the second record, mainly due to personal issues and because we wanted to push our songwriting further. None of us are technical geniuses and we’re certainly not the most prolific band in the world. so it takes a while to meet our expectations. We hope the 3rd album will come quicker though. we got off to a good start and wrote one of our best songs ever. but now the standard’s been set we have to try and live up to it with everything else we put on the album. that could be a tall order.

Who would you cite as your main influences? What bands do you listen to?

It varies a lot between us and changes over time. right now I’m listening to JR Ewing, Explosions in the Sky, Fugazi, Caretaker and Mono.

One thing that always strikes me about HIFH is the ferocity of your live shows – the intensity and passion rolling off that stage is amazing – back in 2003 you actually suffered a minor brain hemorrhage after a show? Has that slowed you down or made you reassess how you perform live?

Kind of. Its not that our shows are any less intense but after a while just screaming and prancing around like a maniac starts to feel less intense. We’re constantly trying to evolve and grow as a band and I think that’s reflected in our shows. We still love the sound of loud dirty guitars though so in that sense i think we’ll always put on a good hard rock show. its just getting a bit more varied.

You toured the UK and Europe last year, how was it to be back on stage? What was your most memorable show?

It was good to get out to places we’ve never been – it makes touring a lot more interesting. The shows were a mixed bag. Some of our best and worst. Most memorable was Paris. It was the last show of a long tour and it was the biggest and best. Tours rarely end on such an undisputed climax.

Where’s your favourites venue to play?

Who’s the most annoying member of the band in the tour bus?

What kind of stuff you guys get up on the tour bus to pass the time?

Got any dirt on anyone on the band?

Worst experience of the tour?

Being locked out our hotel in Denmark at 4 in the morning in winter, drunk and freezing to death.

What does 2006 hold for Hell is for Heroes? When will we see you guys onstage in London again?

We’re back on the road in March and April. We’ll be in London on the 10th March at the Mean Fiddler. It’s a co-headline with Boy Sets Fire from the US. Hopefully we’ll break with tradition and write, record and release an album within a year. We also have our first album release in the US next month through Epitaph.

You don’t want to know…

And finally..any last words of wisdom for the readers of Caught in the Crossfire?

Remember to clean behind your ears and between your toes.

For further information on Hell is For Heroes tour check out their site www.hell-is-for-heroes.net or www.burningheart.com