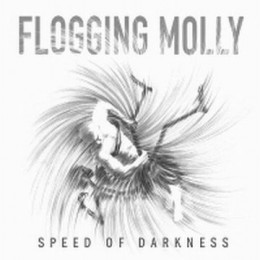 If you’ve ever seen a Flogging Molly show, you’ll most likely agree that they were born to play live; a gloriously ramshackle brew of traditional Irish folk and punk rock that could get a dead horse jigging. It’s been just over a decade since the band released their debut album ‘Swagger’, and although the Celtic folk-punk genre hasn’t really evolved musically since then, it has become more popular – with a fair few bands arming themselves with fiddles and accordions and claiming dubious affinity with the Emerald Isle.

Flogging Molly frontman Dave King, however, has a genuine working-class Dublin background, and his oft-autobiographical style has infused his band’s music with a sense of authenticity and honesty that others lack. Granted, they’ve yet to make a truly amazing record – although 2002’s ‘Drunken Lullabies’ came close – but they are consistently good, and ‘Speed Of Darkness’ is a fine addition to the family.

Whereas previous album ‘Float’ had a largely upbeat tone, the, erm, darker outlook of ‘Speed Of Darkness’ should strike a chord with anyone feeling the pinch of our Coalition government’s cuts. “I’m a working man, without any work,” spits Dave on ‘Revolution’, before railing against the effects of urban decay on ‘Don’t Shut ‘Em Down’ and ‘The Power’ Out’. Yes, he’s pretty pissed off, but the tunes are memorable as ever; with the belter of a title track and ‘Saints And Sinners’ both potential live favourites.

The biggest surprise on offer here is the five-minute ‘The Cradle Of Humankind’, which builds slowly from a simple piano and accordion intro into an anthemic, guitar-laden song that should draw a sing-along from all the but the most churlish of listeners. ‘Speed Of Darkness’ may essentially be Flogging Molly doing what they always do, but they’re still doing it well.